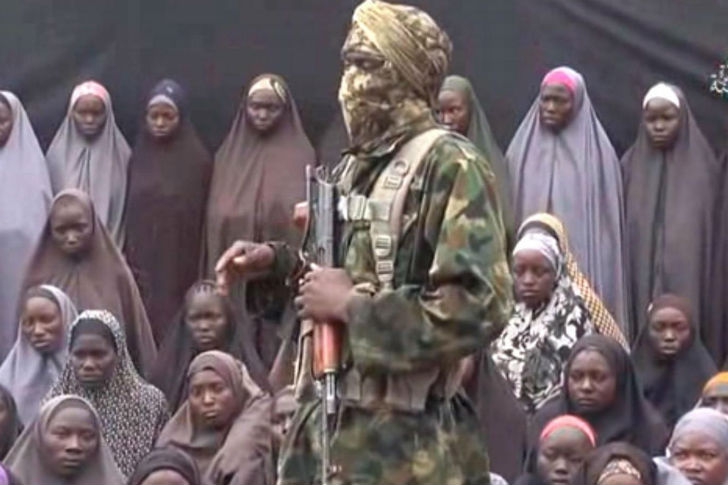 MISSING: More than 200 of the girls are thought to remain in the clutches of the militants.

MILITANTS from the infamous Nigerian Islamic group Boko Haram have released a video that apparently shows some of the girls kidnapped from a Chibok school more than two years ago.

Around 50 girls appear in the footage, which depicts a masked man clad in camouflage fatigues and brandishing a gun standing in front of the group, demanding the release of Boko Haram fighters in return for freeing them.

The girls are thought to be among of the 276 that were abducted in April 2014, of whom at least 200 are thought to remain in captivity, and in the video the man says that some of them have been wounded and carry life-threatening injuries, others have been killed in air strikes, while at least 40 have been “married,” with one of those in the video carrying a baby.

“We don’t want to do anything with these girls, our demand remains the same,” he says in the Kabaku language.

“We want the government to release our fighters who have been in detention for ages; otherwise, we will never release these girls.”

A staged interview is then conducted with one of the young women, who appears to be named Maida Yakubu, during which she says: “What I can say is that our parents should take heart…talk to the government so that we can be allowed to go home.”

The girls in the video are thought to be being held by a breakaway faction led by leader Abubakar Shekau, and this is the third video released since they were taken prisoner, with Boko Haram always insisting that they are safe but will only be released if the Nigerian government cede to their demands.

The release of this new video appears to be an attempt to curry favour by reigniting public sympathy and painting the government’s military campaign against the jihadists as a failure, although it is also noteworthy that there has been a recent split in the structure of Boko Haram, with one faction splitting away as it claims to be the true regional arm of Daesh.

Boko Haram has been waging a violent campaign in northern Nigeria for a number of years as it tries to impose Islamic rule on the region, and the kidnapping of the girls was greeted with condemnation around the planet, with Michelle Obama and other public figures backing the campaign #BringBackOurGirls on social media.