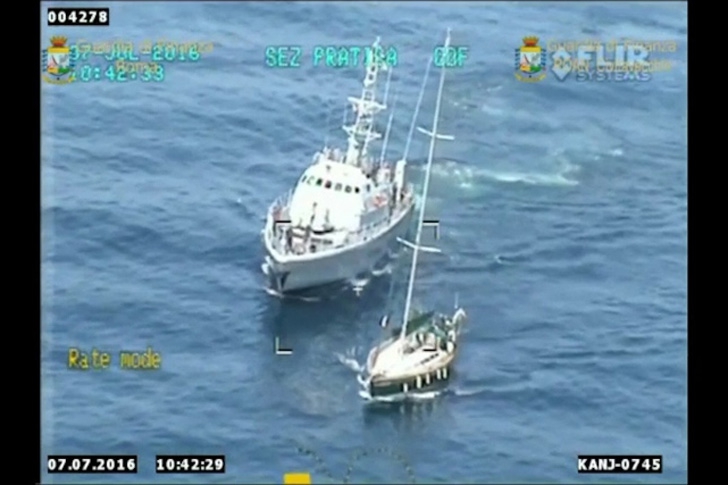 The boat being intercepted in Italian waters.

EUROPOL is a European funded office which co-ordinates information received from the police forces of each member of the European Union in order to ensure that all member states are alerted to any pan-European crime and as previously reported in Euro Weekly News, Britain will have to resign from the group when the Brexit finally comes into operation.

In the meantime however, an operation code named Escota which was co-ordinated by EUROPOL, officers of the Guardia Civil, Border Guard and Central Investigation Bureau of Poland, the Guardia di Finanza of Italy, the British National Crime Agency and the Royal Gibraltar Police Gibraltar have dismantled a criminal organisation composed of Polish criminals involved in the trafficking of drugs from Morocco to the European Union, mainly to Poland, Britain, Sweden, Germany and Ukraine.

Nineteen Poles have been arrested and charged with a number of criminal activities and amongst those arrested was the head of one of the four major criminal organisations in Poland that are known to have been involved in murder, robberies and extortion.

Each member of the gang had a special role and one had established a base of operations in a small coastal town in the province of Granada, where he was responsible for logistics and also relationships with influential people in the area.

The head of the gang spent most of his time in Poland and Germany, but when the time came for any major activity, because he was both careful and wanted to keep an eye on the activities of others in the gang, he rented a luxury home in the Malaga coast, and from there, regularly made the 150 kilometre round trip to the Granada operation.

After much investigation, officers of the Italian Police intercepted one the gang’s boats in Italian waters which was carrying more than 3,300 kilos of hashish and at the same time, officers in Poland and Spain carried out raids on properties in those two countries.

As well as those arrested and the hashish, the joint operation also seized a sailboat, three vehicles, electronic equipment, documents and €20,000 in cash.