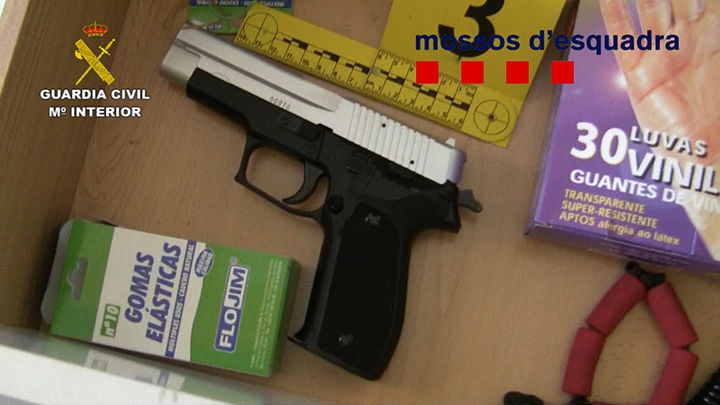 One of the guns seized in the raids

THE Guardia Civil and the Mossos d’Esquadra, in a joint operation, have dismantled a criminal organization dedicated to drug trafficking operating in Barcelona and the Campo de Gibraltar.

The operation has resulted in the arrest of 12 members of the organisation , the impounding of more than 2,800 kilos of hashish and seizure four Rhibs, two tractors six luxury cars, five guns, more than €72,000 in cash as well as police uniforms.

Although initially based in Barcelona, part of the group moved to Malaga province where their main activity was to steal drugs and other items of value from rival gangs. As this venture proved unsuccessful, they also returned to their previous role in drug smuggling and set up a further base in which to store the drugs in Nerja.

Having been involved in a disastrous operation off the Axarquia coast when a boat smuggling drugs from Morocco broke down at sea and the boat that they sent out to rescue it, also broke down, the smugglers had to abandon their cargo and were rescued Salvamar helicopter.

Subsequent to this, they moved their operation to the Campo of Gibraltar, renting a property on which they spent a large of money to make secure with dogs and CCTV. They started operations in May 2015 and even offered their transport services to other criminals.

In January 2016, a patrol of the Guardia Civil discovered several people with an inflatable near to the property and although they fled, two were arrested which convinced the leaders of the gang to retreat to Barcelona but the lure of Morocco and drugs was too great and they relocated to San Roque near the Guadarranque river.

Investigations showed that they also had a property in La Linea de la Concepcion where drugs were stored and guarded. With approval from the court, the officers raided the house in La Linea where they were found a total of 89 bales of hashish weighing approximately 2,856 kilos and arrested three people.

Following this, they undertook coordinated raids at a further six properties, three in Barcelona, two and San Roque and one in Algeciras during which additional people arrested and goods and money seized.