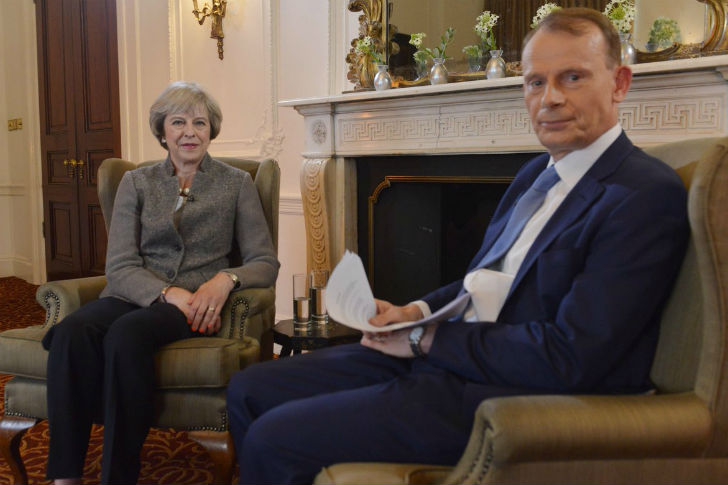 “I'M NOT GOING TO PRETEND THAT IT'S ALL GOING TO BE PLAIN SAILING”: Theresa May on the Andrew Marr Show.

THERESA MAY has warned that Britain must be prepared to face some “difficult times” as it exits the European Union.

Speaking on The Andrew Marr Show prior to travelling to China for the G20 summit, the prime minister said that the country was in need of a period of stability, and that Brexit would not be “plain sailing.”

In her first major interview since taking office, Mrs May confirmed that EU talks have been put on hold until 2017, while vowing that the process will not be “kicked into the long grass”.

When asked if she was tempted to call a snap election, with polls suggesting that she could increase her majority by a significant margin, she said: “I’m not going to be calling a snap election. I’ve been very clear that I think we need that period of time, that stability, to be able to deal with the issues that the country is facing and have that election in 2020.”

The prime minister insisted the country would “make a success” of Brexit, asserting that she wanted “an independent Britain, forging our own way in the world.”

She also repeated her stance that controls of the movement of immigrants from the EU to Britain must be agreed with Brussels.

Ahead of the G20 event in Hangzhou, Mrs May held her first bilateral meeting with President Barack Obama, who said the UK would not be a priority for a US trade deal.

A tricky start to the summit was worsened as Japan then issued an unprecedented 15-page document warning about the negative repercussions of Brexit.

May was told that the US intends to concentrate on deals with the EU and a number of Pacific nations before negotiating with Britain.

This was followed by Japan’s missive that there could be a series of corporate exits from the UK unless certain single market advantages can be retained.

Around half of Japanese investment in the EU, from companies such as Nissan, Honda, Mitsubishi, Nomura and Daiwa, currently winds up in the UK.

The prime minister must also contend with diplomatic tensions with China over their proposed multibillion investment in UK nuclear energy, which she has placed under review.

When asked if she trusted the Chinese, she said: “Of course we have a relationship with them,” she replied. “We are working with them. And we have seen significant Chinese investment into the United Kingdom. What I want to do is build on that relationship. But I also want to be able to build on relationships with other countries. I want to be unashamedly open to free trade and a global leader in free trade.”

She also emphasised that the UK is “open for business” and wants to promote free trade while keeping in mind the negative concerns expressed about globalisation in some quarters.