Latest: Fires continue to rage through the Costa Blanca 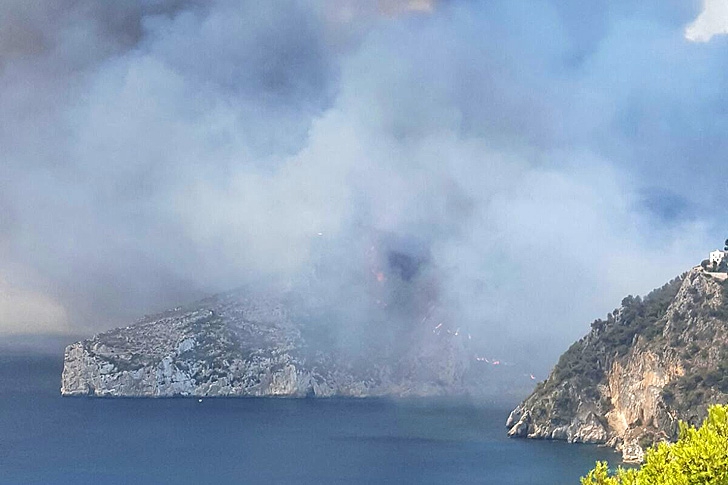 In the latest news, trusted sources have told EWN the young men arrested for questioning in connection with the fires have claimed they were paid to start them. We’ll bring you more on this over the coming hours, but the situation in Javea and nearby Granadella Bay has worsened since midday after the wind changed direction and meant the flames are now said to have reached the edge of the Cumbre de Sol urbanisation, which has been evacuated.

Four aerial vehicles and three ground units have also been dispatched to tackle another blaze which started in the Bolulla-Jalon area around 2.30pm, as can be seen in the following photograph.

Here is the current situation at Granadella, where planes continue to fight the now-expanding fire.

Hundreds of people were forced to flee their homes across the Costa Blanca and many others have been destroyed by the wildfires raging across a large area of the region.

The fires in Javea were started deliberately on Sunday, one of the hottest days of the year.

Chief of the Valencia emergency services, Jose Maria Angel, said he had no doubt “the hand of man” was behind the fires which have spread and forced the emergency services to call for military back-up in the fight to bring them under control.

Hundreds of firefighters on the ground are being assisted by water-carrying planes as they struggle to contain three major blazes.

At one stage on Sunday the fire was thought to be under control but the strong winds and scorching temperatures combined to rekindle the flames.

The speed of the encroaching fire meant terrified residents barely had time to collect their belongings and in many cases, grab their pets, before being told to flee their homes.

Confusion reigned in Javea with some people going to the homes of friends while more than 250 people spent the night in a college and more than 70 others were put up inside a school.

“Some people have nowhere to go and others are being put up in hotels, hostels. There´s a lot of smoke and everywhere is just black.”

Ms Edmonson said she was at home on Sunday evening when she realised the fire had spread to residential areas.

“It was right up to the back of my fence. I told one friend to leave her area and then she came back to say she´d been evacuated again.”

Fellow Pinasol resident Karen was left with no choice but to flee her home with her three dogs on Sunday evening. Just metres away, flames ten feet high threatened to engulf her villa.

Miraculously when she returned on Monday her home was still standing but she told EWN she could still see huge plumes of smoke on the horizon.

“My heart goes out to all the people who have been less fortunate,” she said, adding she had nothing but praise for the firefighters who were heroically tackling the blazes.

Homes in nearby Benitachell, Tossalet and Cansalades have been evacuated amid dramatic footage of the blazes destroying the neighbouring countryside.

BBC Radio 1 presenter Chris Stark was caught up in quickly unfolding drama, tweeting “This is crazy. I think my car and maybe my apartment is on fire”.

And he told his Twitter followers that while his family was safe, the situation remained “scary”.

It is thought more than 200 firefighters are involved in the operation to bring the fires under control.

One Spanish volunteer firefighter described his feelings of helplessness at not being able to stop the fire as it destroyed people´s homes.

He spoke of seeing images “that will never be forgotten”.

Adam King, breakfast presenter on Overseas FM, said it was a “scary” situation but the community had been “trying to stick together”.

At one stage he said firefighters told him they had been on shift for 17 hours and that the large gas cannisters used to heat people´s homes had been pushed or rolled into swimming pools to ensure they did not heat up and explode.

If you are caught up in this tragedy, you can contact the editor at Euro Weekly News on [email protected]