Hundreds evacuated as huge wildfire rips through forest near Javea 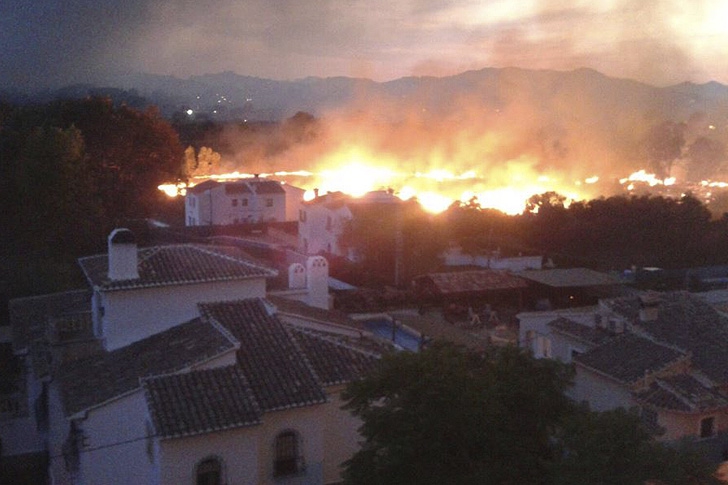 OUT OF CONTROL: Weather conditions are complicating the firefighting operation.

A MASSIVE forest fire has destroyed homes and woodland and forced the evacuation of more than 1,000 people from two towns in Alicante province.

Nearly 260 people were forced to spend the night in one school and around 70 in another after the fire took hold in a wooded area outside Benitatxell in Alicante on Sunday September 4.

The emergency services were forced to bring in soldiers to help tackle the blaze which is thought to have started around 4pm in an area known as Mirador Cumbres del Sol.

A second fire then broke out near the town of Javea affecting the national park of La Granadella, an area of ecological importance, at 6.30pm.

A third blaze then erupted at Playa del Arenal around 8.30pm.

Water-carrying planes and helicopters were brought in to help calm the blaze but were forced to retreat at 9pm due to a lack of light, returning as dawn broke on Monday.

Adverse weather conditions, including temperatures of 40°C, winds of more than 40 kilometres per hour and 20 per cent humidity are complicating the job of getting the fire under control.

Police have described the fires as “suspicious, and the Director General of the Valencian Security and Emergency Response Agency, Jose Maria Angel, has suggested that they were started “by the hand of man,” adding that the perpetrator purposely “chose the hottest day of the year.”

Half of Javea’s 30,000 residents were born outside Spain, and the area is popular with British expats and tourists.

Radio One DJ Chris Stark posted a video on Twitter, saying: “This is crazy. I think my car and maybe my apartment is on fire. I hope everyone in Javea is ok.”

Meanwhile, two other fires are raging in Moixent (Valencia) and the area around Bolulla-Callosa d’En Sarria (Alicante).

The road between Fontanars and Moixent is currently closed as emergency services battle to prevent the flames reaching the Sierra de la Atalaya and a local furniture factory.