Theresa May in China talks about immigration 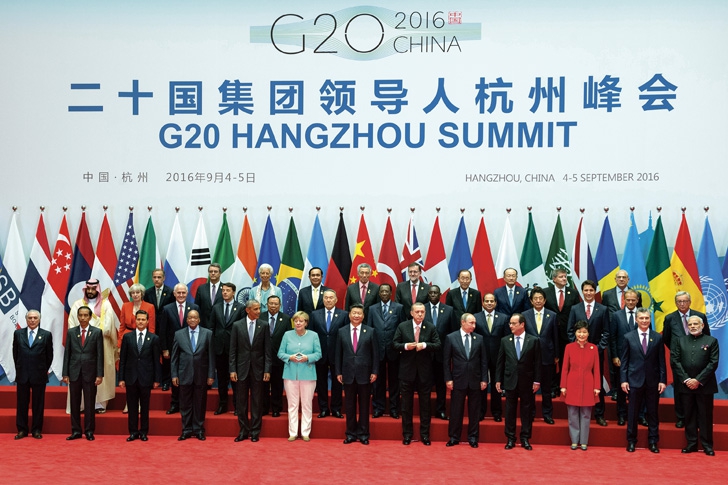 HEADS OF STATES: Including Theresa May at the G20 meeting in China.

NORMALLY not one to be accused of sitting on the fence, Theresa May kept remarkably quiet during the run up to the Brexit referendum, deliberately aligning herself with the Conservative party position but without becoming strident in her support, possibly in order to ensure that her position was protected regardless of which way the vote went.

In the event, her lack of activity worked supremely in her favour with the result that David Cameron resigned and the Gove/Johnson pairing split, leaving her as the only candidate to become Prime Minister.

Since then she has disposed of a number of Cameron supporters such as George Osborne and brought in two prominent Brexiteers, Davis and Fox to implement the move away from the European Union.

Now, during her visit to China to participate in the G20 meeting she has used the opportunity to announce she will not be introducing the immigration points system, promoted so strongly by the Brexiteers prior to the referendum and used by Australia in particular to ‘vet’ potential immigrants.

In fact, such a points system, based on ability to speak the language, financial worth, skills, health and existing family in the UK already exists but does not currently apply to anyone wishing to live in the UK who is an EU national.

Those who are opposed to continued immigration from the EU have said Mrs May has gone soft on immigration or is simply walking away from a referendum promise. What those critics forget is the so called promises were made by the likes of Gove and Farage and were not government policy, nor was the imaginary promise of injecting more money into the NHS from EU savings.

There seems to be a natural assumption Britain should close the door to EU workers whilst protecting the interests of expatriates through the Union which does seem rather unlikely. As a recent cartoon in one of the UK national papers so succinctly suggested, if we want to ensure access to the single market and protection for British nationals, perhaps we ought to apply to join the European Union!

With heads of states of the most important economies in the world visiting China, Mrs May will have had a chance to discuss possible trade and access deals for Britain after it leaves the EU and it is suggested, amongst others, both Mexico and Singapore have indicated they would be happy to enter into some form of partnership.

Unfortunately, President Obama said a trade deal with the UK is not a priority as he needs to make deals with the EU, Japan has issued a warning about the dangers to the world economy of Brexit and even Mrs May has suggested there will be ‘difficult times’ ahead

In the meantime, in parliament, Brexit Minister David Davis stood to tell fellow MPs and a waiting nation that the Brexit result was a clear sign the majority of British people wanted to see control of the countries destiny in the hands of parliament rather than Brussels and that the government intends to protect the rights of EU nationals in Britain, provided the rights of UK nationals in the EU were equally safe.

Mr Davis who is without doubt an intelligent man, committed to the role he has undertaken, explained he is confident Britain will be able to negotiate a future whereby it will grow outside of the EU but will keep all of its former partners as friends whilst developing a brave new economy and position within the world

As a potential watchdog to ensure there is no deviation from the Brexit decision, the one man who claims he was responsible for the result, Nigel Farage, has warned if the government doesn’t do the job properly, he will return to UKIP and kick start the situation.

In reality the latest news therefore is the government is still intent on leaving the EU, is unlikely to be particularly harsh over immigration rules, expects to control its own destiny whilst allowing our EU cousins to continue to work in Britain and when the time comes to enter into negotiations with the 27 remaining member states, expects to be able to protect the rights of all British citizens living or working within the Union.