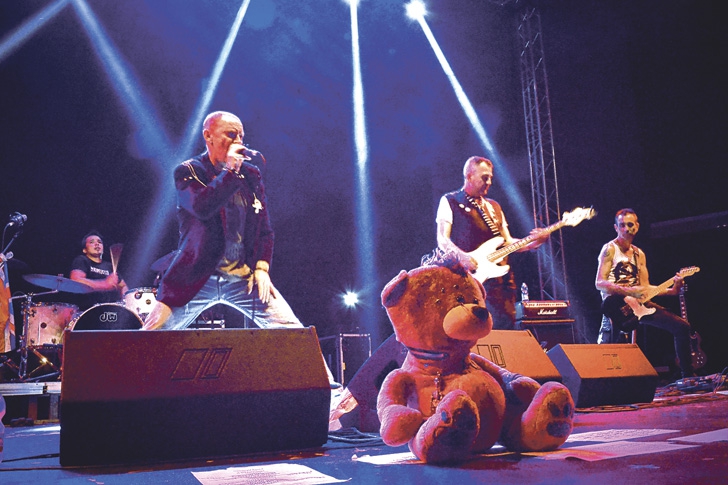 The queue of rock fans waiting for the doors to open already enjoying the music from inside, as the volume was raised in preparation for a concert celebrating the best of old school rock, organised by Big M Promotions with Benalmadena Suena.

By 9.30pm over 700 people were eagerly awaiting the first artist, Terry Shaughnessy, of the band The Universal. Playing his own material, Terry was a great choice to open the concert, and his song ‘Stand up,’ was particularly well received.

With the crowd in full concert mode, The Reinfected took to the stage for a PunkFest. ‘Nearly Headless Nick – The World’s First Punk Teddy Bear,’was introduced by Roland ‘Rotten,’ and the band launched straight into ‘Judy is a Punk.’

A full hour of great punk hits from Sex Pistols, Ramones, Clash, and some David Bowie followed, and the more energetic headed straight down to the front to ‘Pogo’madly around!

With everyone now well and truly in the concert mood, Big M Promotions director, Martyn Wood, introduced Stereo 80, a band that has grown in popularity over the past two years, having played alongside top Spanish bands Danza Invisible, Nacha Pop, and La Union, as well as appearing in previous Big M Concerts along the Costa del Sol.

A huge roar went up, especially from the large Spanish contingent, as vocalist, Claudio Pantaleon, came bounding on stage, and the band went straight into ‘Here I go Again’ by Whitesnake.

Stereo 80 had virtually the whole auditorium on their feet by the second song, and the area in front of the stage was packed with bouncing bodies as Van Halen’s, ‘Jump,’ and AC/DC’s, ‘Highway to Hell,’ thundered out, with the superb guitar of Jose Fernancaster, and Claudio’s truly amazing vocals ripping through the Hot Summer Night.  A chorus of the Spanish football chant, ‘Ole -oleoleole,’ rang out around the auditorium from Spanish and foreigners alike.

Facebook was set alight that Saturday with loads of people using Facebook’s ‘Go Live’ video app, the auditorium a sea of phones all focused on the stage, and reaching a climax when Big M Concert’s Danny Ford, announced that the concert was going ‘Live’ from the stage for Stereo 80’s encore of ‘Whole Lotta love’, and ‘The Final Countdown.’

To find out details of future concerts and other events, contact Big M Promotions by going to, www.costadeldisco.com.