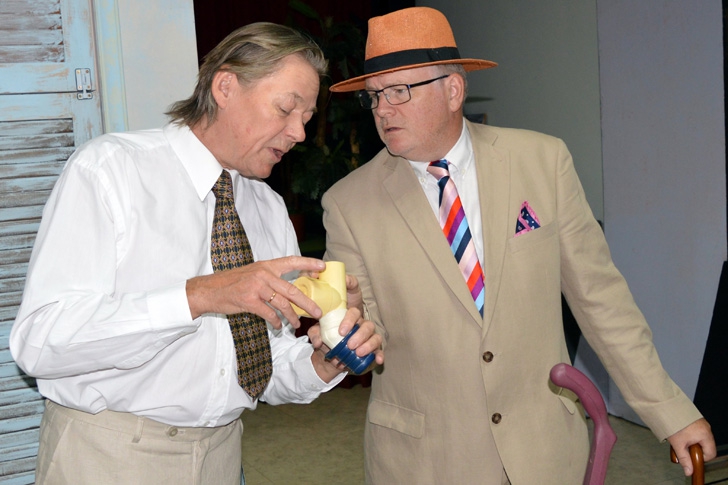 THE climax of the Javea Players’ 40th Anniversary celebrations will be the staging of Graham Green’s ‘Our Man in Havana’ at the Union Musical in Gata from Tuesday November 8 to Saturday November 12.

Graham Green had first-hand knowledge of spying. He was recruited into M16 by his sister Elizabeth and he reported to the British intelligence services until the end of his life. Green also knew well the pre-Castro Havana, a volatile city awash with decadence, corruption and espionage. And, he was well aware of the gullibility and paranoia of the British Secret Service.

This knowledge he put to admirable purpose to write his book, which he described as ‘an entertainment’, Our Man in Havana. Clive Francis has adapted the book for the stage and the play you are invited to enjoy at the Union Musical is witty, highly satirical, very funny and thrilling entertainment.

Our man in Havana is Jim Wormold, a far from successful vacuum-cleaner retailer. His financial struggles are exacerbated by the extravagances of his teenage daughter and so he can’t resist the financial rewards offered for becoming British Secret Service’s ‘man in Havana’.

His problem is he knows nothing of Cuba’s politics, knows no one of even the slightest influence and of spying he hasn’t a clue. But, when the needs must, even a man like Wormold finds a way. In his case he invents – reports, new agents, military installations – and it pays him well. Then things go badly wrong. The enemy as well as British intelligence start to believe his make-believe and agents begin to get killed.

The Javea Players’ production has the same theatrical DNA has their highly praised production of ‘The 39 Steps’, Cherry Cabban again directs and the ingenious set design is again the work of John Reynolds. And again, a very talented cast plays a huge number of roles.

Cherry Cabban’s production of ‘Our Man in Havana’ plays the Union Musical, Gata de Gorgos from Tuesday November 8 to Saturday November 12.Curtain up 8 pm. Tickets priced at €12 (€11 for block bookings of ten or more throughout the run) are now available from the box office at [email protected] and on 96 579 4937.