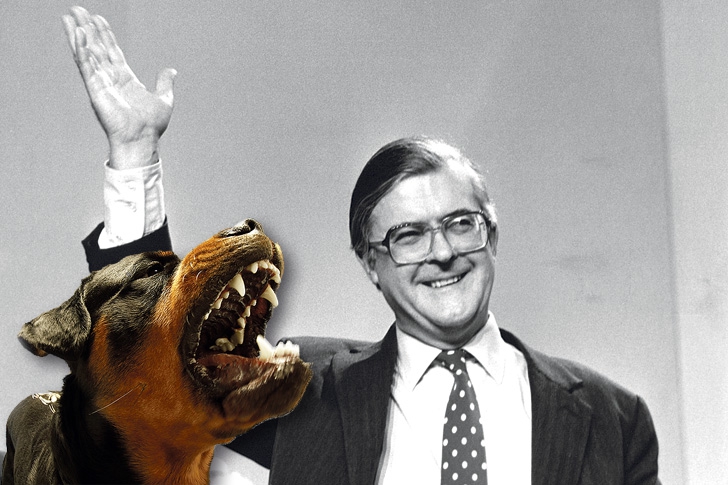 KENNETH BAKER: Pushed through the Act in the UK. / DANGEROUS DOGS: Certain breeds are banned in the UK.

THE mother and grandmother of a baby girl are languishing in a UK prison where they will stay for at least a year. Their crimes were to own and be in charge of, a dog described by a vet as one of the most dangerous she had ever come across.

Molly-Mae Wotherspoon was just six months old when she died in October 2014. The pathologist’s report detailed injuries to every limb and puncture wounds to her brain.

The head wounds resulted in the massive blood loss which killed her.

Her mother, Claire Riley, is just 23: her grandmother is 55 and battling alcoholism.

The dog that killed Claire’s baby daughter at the family’s home in Daventry, Northamptonshire, was described in court as an American pit bull. It is a breed that is banned in the UK.

Jailing them, Mrs Justice Carr said Molly-Mae had been attacked and killed in “a tragic and totally avoidable incident.”

Why did this family own such a dog? Was the dog a fashion statement, a creature muzzled in public or walked at the end of a chain with links so large they would secure a yacht to its moorings?

Was this dog yet another way to say to the world ‘look at me, I’m cool?’

The UK’s Dangerous Dogs Act bans four breeds: the pit-bull, the Japanese Tosa and two breeds from South America, the Dogo Argentino and the Fila Braziliero. It also tries to ban any dog that might be a cross from one of these four breeds.

Under the act these dogs are only allowed in the UK when an exemption certificate has been issued. That means a muzzle in public places, a leash at all times, they must be registered and insured, they must be neutered, tattooed to allow for identification and microchipped.

All those provisions are designed to ensure one thing: the safety of the general public.

But it’s not working is it.

Spanish legislation goes further in terms of the breeds that are banned unless licensed and controlled. It lists around 15, and includes the Rottweiler and Doberman, breeds that are generally seen as acceptable in the UK.

So who will take responsibility? The dog owners, rather like the gun lobbyists of the NRA in the US, point to poor training as the reason why an animal kills.

What training did Claire Riley or her mother Susan Aucott give the dog that ended her daughter’s life?

Until that time comes, fatal dog attacks will continue to horrify all of us. But when the victim is a tiny girl whose life had barely begun isn’t that the moment to finally say ‘enough is enough??’