Britain and Argentina agree to cooperate over the Falkland Islands 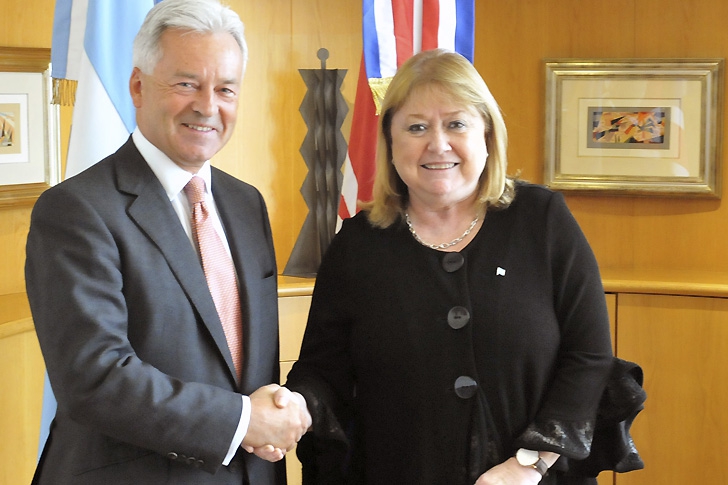 AFTER years of rhetoric from the former president of Argentina Cristina Kirchner claiming the Falkland Islands and threatening those companies who undertook business with it, the new Argentine government has taken a much more phlegmatic position and following a visit to Buenos Aires by Foreign Office Minister Sir Alan Duncan has indicated its wish to cooperate.

This is the first visit by a Foreign Office to Argentina since 2009 and the minister met with a range of high level politicians including the President Mauricio Macri and Foreign Minister Susana Malcorra which has resulted in a joint statement between the two countries over the Falkland Islands.

The two countries have agreed to work toward removing restrictive measures around the oil and gas industry, shipping and fishing affecting the Falkland Islands in the coming months. Both delegations also expressed support for a project to identify the remains of unknown Argentine soldiers buried in the Falkland Islands emphasising the humanitarian nature of this work.

None of the discussions or the statement in any way affects the sovereignty of the islands and the UK remains absolutely clear in its support of the rights of the islanders.

The statement sets out areas of closer co-operation for the two countries, including through increasing trade links, uncovering new investment opportunities, strengthening cultural ties, tackling corruption and organised crime, and increasing links in science and technology as well as encouraging new and better air services.

According to a release from the Foreign Office, Sir Alan Duncan said:

“The UK and Argentina are building a positive relationship based on areas where we so clearly agree.”

“Over the past two days I have held meetings which have helped us to reach agreements. The UK and Argentina have a broad relationship that goes beyond our differences.”

“I am pleased we have agreed the Falkland Islands are free to set up flight connections with other countries in the region. A monthly stopover in Argentina will see a further arrangement similar to that which exists already.”

Not only will this come as welcome news to the 3,000 Falkland Islanders but should be welcomed by the Gibraltar Government who are used to Argentina and Spain mutually supporting each other over claims of the sovereignty of the two Overseas Territories.

It must be remembered that Argentina continues to be in severe financial difficulty and it may well be that it sees definite benefits in backing down over imagined sovereignty in order to reap the advantages of a closer relationship with the UK.