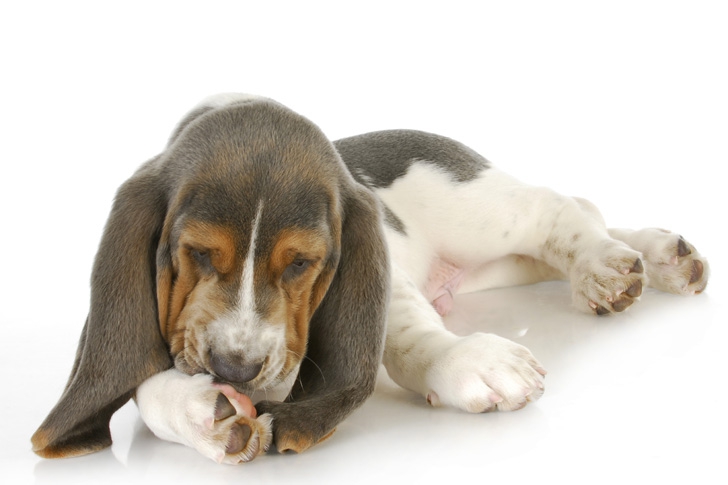 DOGS that ritualistically scratch and lick could be indicating there’s an allergic reaction to food or an ingredient in the food. If the body defence mechanisms are in action, this will trigger off cells, which release histamine.

In dogs, these cells are located in greatest numbers on feet, legs, around the ears, eyes and nose, on the root of the tail and on the chest and abdomen. Frantic licking or scratching in these areas, especially after eating, will eventually damage skin leaving it open to infection.

Some behaviours are so extreme the dog or cat doesn’t want to sleep. It’s now been proven, according to Andrew Luescher, director of the Purdue University of animal behaviour, these compulsive disorders seem linked with genetics, increased endorphins and altered levels of neurotransmitters in the brain, particularly serotonin and dopamine.

Tail chasing and chewing in Bull Terriers, flank sucking in Dobermans, hind end licking and sucking in Schnauzers is well reported as is imaginary flies that dogs chase.

If your animal scratches or licks excessively speak to your vet who’ll be able to determine if it’s an allergic reaction to food or if there’s a medical cause. Parasites, skin problems, arthritis or liver disease could cause excessive licking; and bowel/anal problems need checked.

Some vets understand the value of a canine behaviourist and often refer to enable study of a particular behaviour to see if it’s a learned response. If physical causes and learned behaviours are ruled out, a vet or animal behaviourist takes a detailed history to try to establish the trigger.

Common causes include a new baby or spouse in the family, moving house, holiday periods like Christmas (when they get less attention), children going off to boarding school, less exercise, frustration at being left alone/in too small an area, being confined for too long; and harsh or inconsistent punishment. If they don’t know what to expect from owners it’s likely to cause conflict.

Owners shouting ‘Stop licking’ is enough to cause conflict in the mind of a pet. Reduce stress levels by maintaining regular schedules like feeding three times a day at a set time, habitual and increased exercise and consistent use of commands followed by immediate reward of ‘Good dog.’

Sometimes drug therapy is required to correct imbalances in the brain, as it is difficult with behaviour modification alone.