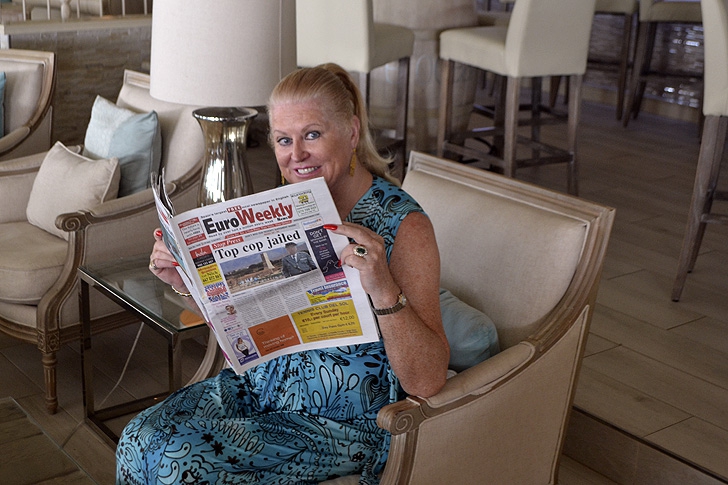 POSITIVELY Pink and Positively Blue the Mijas based charities’ sole purpose is to raise the necessary funds to provide education, support and free breast and prostate screening programmes to women and men who live on the Costa del Sol and although it is aimed primarily at the British expatriate community, as long as there are funds available, no one is turned away.

Funds however are the perennial problem for Lorraine Palmer of El Oceano Hotel who set up Positively Pink after suffering a fright more than 10 years ago when she thought that she had herself developed breast cancer. Happily this was not the case but despite the fact that she had private health insurance, it took several weeks to organise the screening and then additional weeks waiting for the results.

The stress that she, her family and others went through just imagining the worst whilst waiting for the results made her vow that she would do all that she could to make life easier for those in a similar situation and that spurred her on to set up Positively Pink.

It is a small charity that can make a big difference but can only help if it has the money to do so and their Gala Dinner which is being held on October 6 (coincidentally Lorraine and husband John’s wedding anniversary) at El Oceano Hotel is the main fund raiser with last year’s dinner raising €30,000, all of which is devoted to health checks and support of those who are found to be positive.

In the last year, 1,000 women and men have been checked and of those, 98 per cent were found to be healthy but 11 men and 7 women were diagnosed positive. The important thing is that rather than wait for weeks for results, all 1,000 were given their results within a few days of the tests.

Euro Weekly News is a long-time supporter of the charities and was invited to meet the irrepressible Kim Woodburn who first came to public attention in 2003 as one of the two presenters of How Clean is your House which took British TV by storm.

Kim at 74 is a lively and friendly lady who whilst in semi-retirement was delighted to be invited by Lorraine Palmer to act as the host and auctioneer for the Gala Dinner and she flew over specially from the UK with her husband Peter to help raise funds for the charities and to renew her contact with the Costa del Sol which she knows and loves.

During the interview, she couldn’t speak highly enough of the charities and the work they are doing to try to fight the curse of cancer which whilst diminishing in some areas, appears to be more prevalent in the case of Breast and Prostate cancer.

She is a very down to earth person, who has few of the airs and graces that you sometimes see in ‘celebrities’ and she puts her ability to chat with anybody and everybody down to the fact that until the age of 61, she was a cleaner earning very little and effectively living from hand to mouth.

Then when her big break came, she was overwhelmed by the fact that she could afford to buy a house and car and have some money in the bank without anything she owned being on HP.

She speaks with affection for some of the work that she has done, especially I’m a Celebrity which she rather enjoyed even though she had to go through five trials which included eating bugs and parts of a kangaroo, and three things stand out in her mind. Firstly she received a great big cheque when she returned home, secondly she relished the fact that she had a warm home and bath to return to, and thirdly she had made a good friend in Samantha Fox.

She turned down the chance to appear in pantomime this year as it is too tiring as well as the Island with Bear Grylls especially as it would take her away from her husband who suffered a stroke three years ago but she hinted that a month in the Celebrity Big Brother house would be quite welcome as it pays well!

Earlier this year Kim appeared in a documentary Rich, Famous and Homeless which saw her and other celebrities living on the street for five days which raised £500,000 (€550,000) for homeless charities and she also raises funds for a Stroke charity.

One of those performing at the Gala Dinner will be Chelsea Greene, a member of UK based girl band Office Girls whose parents live in Alhaurin. She, together with her mother Michele, decided to be tested and forced her father Martin to have the prostate test, much against his better judgement and whilst the two ladies had no sign of cancer, it transpired that Martin was suffering from the disease. As a gesture of thanks to the charity, Chelsea has flown over from London to take part in the Gala as has her brother who has travelled from the USA.