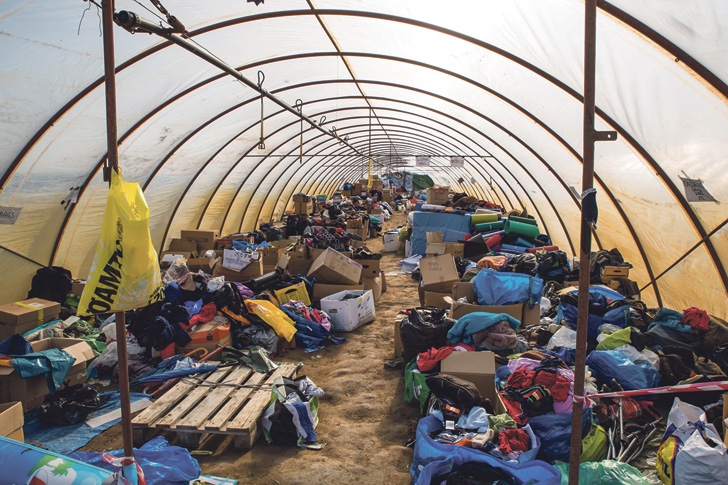 CALAIS CAMP: Aid being left to go to waste.

SO, certain charities are refusing to bring aid to the infamous Calais ‘Jungle Camp.’ Apparently after visiting and witnessing unwanted clothing and foodstuffs being dumped and burnt, the Human Relief Foundation has decided to suspend its charitable expeditions into these areas.

Another reason given is that, despite the bias of the BBC, who mainly feature women and children in their news reports, the charity found the camp contained over 95 per cent of young able-bodied men. Why does that come as such a surprise to them and so little surprise to the rest of us!?

This rag-bag collection of trainer-shod, mobile-clutching cowards should never have even been allowed to get as far as the English Channel. Countries en route should have been weeding them out and turning back thousands of this rabble bunch of feral opportunists. At last however, the French authorities are making closing down moves, and not before time. As I wrote a couple of years ago, the only way to solve this problem is by building camps across Europe. We simply cannot allow them to flood into the towns and the cities of the West, where they will only cause disruption and unrest with the distinct possibility of ultimate violence. These camps should be orderly places, evenly distributed between countries.

They should be controlled and inspected regularly with all amenities, medical care, and acceptable living conditions. Over a period the refugees should be interviewed and assessed, and either given permits to work in allocated countries or deported back from whence they came. Problem solved.

Wonderful to see Corbyn re-elected as leader of the Labour party. At least this means we won’t be seeing this lot in power for many years to come. Probably not in my lifetime anyway. Bliss.

What about the mother who pointed out a black car to her 11-year-old daughter stating that she didn’t like the colour? Her shocked offspring immediately accused her of racism! Sometimes I really do despair of it all. Keep that mail coming and always.