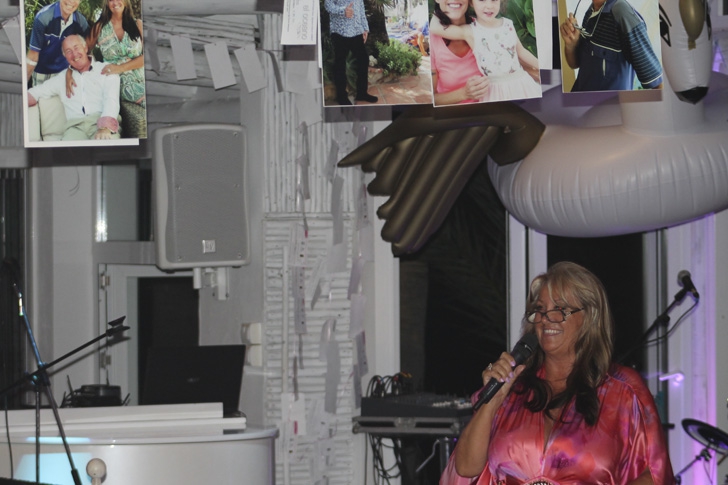 Guests from across the Costa were determined to dig deep to keep two charities going that Lorraine, in her warm and emotional thank you speech, revealed had now saved 8,000 lives.

The charities are generously sponsored by amongst others, EuroWeekly and Spain´s only home GP service, Helicopteros Sanitarios, with Maria José Cañete to the fore supporting a cause that is very close to her heart.

Hundreds of guests, all colourfully dressed in pink and blue to show their support, were treated to an unforgettable evening with wonderful music, great food and the kind of inspirational speeches that makes you realise these two charities provide not just a lifeline, but a way of fighting back.

Lorraine reminded everyone that life is a gift. More than a few tears were shed and it showed as guests dug deep and lightened pockets for a night that meant the more money raised, the more lives saved. She spoke of her great gratitude to all those who supported her work and to those who had donated the prizes, among them Elaine and Alan Conroy, Sarah and Mike Hawes, the team at Vithas Xanit Hospital, Millwall Football Club, Charlie and Team at Pimlico Plumbers and Louise Crumplin from Lou’s Cake-A-Licious.

Among the many guests were Eddie and Debbie Wright from Olivia´s at La Cala, along with uncle Mike, who is thankfully now out of hospital after a recent bout of illness.

The Little Geranium showed its support with Michele and Steven offering the culinary services of celebrity chef Steven Saunders from Ready Steady Cook fame as one of the prizes in the raffle.

The main prize of the evening, at least for the ladies, was a stunning diamond ring – donated by Lorraine´s husband, John –  which was won by Kerry Goldman Pyke who was there with her husband Alan.

A night of superb entertainment was interspersed by two of the highlights, a raffle and an auction compered by the star of the hit tv series, How Clean is your House, Kim Woodburn.

Appealing to the hearts, minds (and pockets!) of the guests, so much was raised that by Monday the figure had reached €26,500 and was still climbing.

Kim’s passion as an auctioneer was backed up by Charlie from Pimlico Plumbers, who more than helped boost the bidding by reminding everyone there, as if it was needed on such a night, that every euro raised meant the chance to save a life.

Among the great prizes were two weeks accommodation at any CLC World Resorts & Hotels resort, tickets for the next Manchester United v Arsenal tie and a free medical check-up normally worth €1,000.

To match its Positively Pink sister, a Positively Blue ball will be held at Olivia’s in La Cala at a date still to be announced by Lorraine. As soon as that news it out, all of us at the EWN family will be throwing our weight behind a cause that really does mean lives are saved.