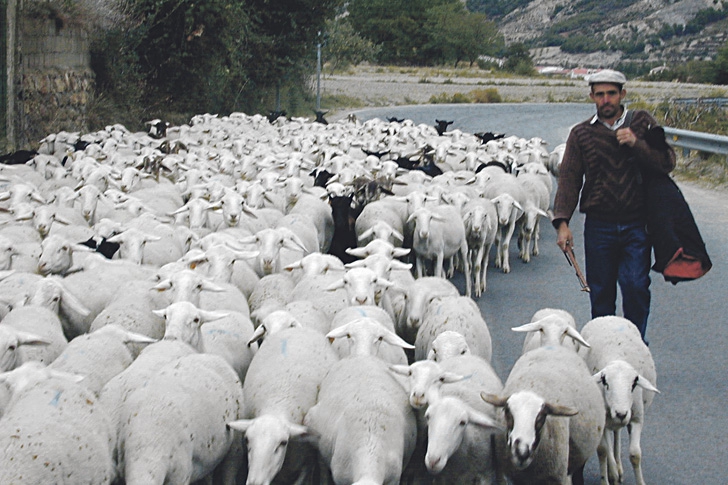 SHEPHERD AND HIS SHEEP: Gone but not forgotten.

They’ve  gone. Everyone has some sort of story to relate about them, but just looking around lately I noticed they are no longer with us.

Vanished like the witches, donkeys, and rural folk that went to town but two or three times a year, who? Well the goodly shepherds of course. They were here, almost on any hill, parading around the golf course in Cortijo Grande and frequently filled up the roads on any road trip to Granada.

Because, around any curve in the road you’d meet them at unexpected hours and great damage could be caused to yourself or car, to say nothing of what the herders would do to you for killing his family. No, it wasn’t worth the risk. But, I miss them now. Any living relic of the past still pertains to us, albeit diminished from our whole.

I enjoyed talking to them, they were always startled to have someone speak directly to them, as if they hadn’t heard a human voice for months. Most likely they hadn’t, they generally knew nothing of the real world, news or local happenings.

So, small talk got you nowhere unless you were English and relished discussing the weather.

The sheep were not cherished but a mutual respect existed. And of course you didn’t dare stroke the dog, such caring touches were upsetting to both the shepherd and snarling beast. And even if you pushed things, there was no way that you could get him to talk about wolf attacks or lost sheep adventures. The shepherd’s world was limited, contrived by his non- ownership yet patronage of his charges. Lose one and there would be hell to pay.

I conked one once at CG golfing. Killed the poor animal outright but the recriminations were worse the nearer I approached the accident as the herder was inconsolable, real tears, authentic palpitations of the heart. Hell, it was probably the only time I hit the fairway with a drive yet the problem wasn’t as humorous as it was momentous in the life of the shepherd. He hadn’t been trained to talk with oddly dressed foreign folk walking around his feeding grounds chasing a small white ball.

All I could say was how deeply sorrowful I was and how much would it cost? He didn’t know, had no idea about the value of doing a transaction concerning something he didn’t own.

Distant higher authorities would have to be consulted. That could take weeks. His eyes welled up with giant tears and he dropped to the ground clasping his head between his hands to stop it from exploding.

I gave him 5,000 pesetas, a card with my name and telephone number and instructed him to take the deceased animal to Andreas Pinero, who ran the estate.

Two days later I got a call from Andreas inviting me for a nice lunch of… guess what?