Real Madrid to upgrade stadium after striking agreement with city 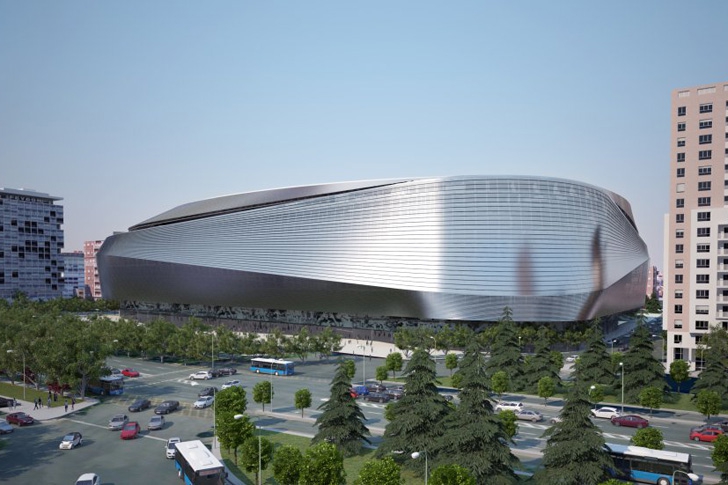 MODERN: An artist’s impression of the revamped venue.

FOLLOWING Barcelona’s announcement in March that the Camp Nou will be remodelled at a cost of €420 million, Real Madrid have finally reached agreement with the city over their plans to refurbish the Santiago Bernabeu.

The stadium will feature a retractable roof and club president, Florentino Perez, has said he expects the project to cost around €400 million with construction due to start in 2017.

A spectacular new facade will also be installed, and the stadium is forecast to be completed by 2020.

“We will see a dramatic transformation of the Santiago Bernabeu,” said Perez. “This stadium is one of the emblematic icons of our city and we want to make it one of the best stadiums in the world and the undisputed symbol of the strength of our capital.”

The refurbishment project has been mooted for years but plans have repeatedly been vetoed by the council and courts, with one ambitious scheme approved by city hall in 2012 only to be scrapped by the regional High Court this February.

Perez and Madrid mayor, Manuela Carmena, held a joint press conference earlier this week at which they announced that an accord has been reached, with the club also intending to incorporate a hotel and shopping centre within the iconic stadium.

“With this agreement we will start a process of modernisation and transformation that will convert the stadium into an avant-garde architectural icon,” Perez added. “This stadium will act as an economic and touristic driver and will contribute to strengthening the image of our city.”

The Bernabeu dates back to 1947 and has been remodelled on several occasions since, although the latest effort will not significantly increase capacity, although the east stand will be replaced to accommodate 3,000 additional seats in order to match the west stand.

It will retain its name, although a sponsorship deal is likely to see it gain a “surname,” according to Perez, while the renovation is being partially-covered by Abu Dhabi investment fund International Petroleum Investment Company.

Real initially wanted to build the hotel and shopping centre alongside the stadium, but they must now be incorporated within the existing structure, while officials have expressed their satisfaction that a car park will be turned into a public area, and that the new roof will reduce neighbourhood noise.

“This deal happened to promote the modernisation project of the stadium and to improve the urban environment around our beloved Bernabeu,” said Carmena. “There is nothing worse for a city than these kinds of impasses.”

Barcelona are also expected to sell the naming rights to their newly-designed stadium which will also feature a retractable roof, while capacity will be increased to 105,000.

Meanwhile, UK-based fans of the two clubs will not be able to watch the upcoming ‘El Clasico’ derby match which takes place at 4.15pm on Saturday December 3.

The television rights are held by Sky Sports, but it remains prohibited to broadcast live football between 2.45pm and 5.15pm, with the law having been created to boost attendance at league games.