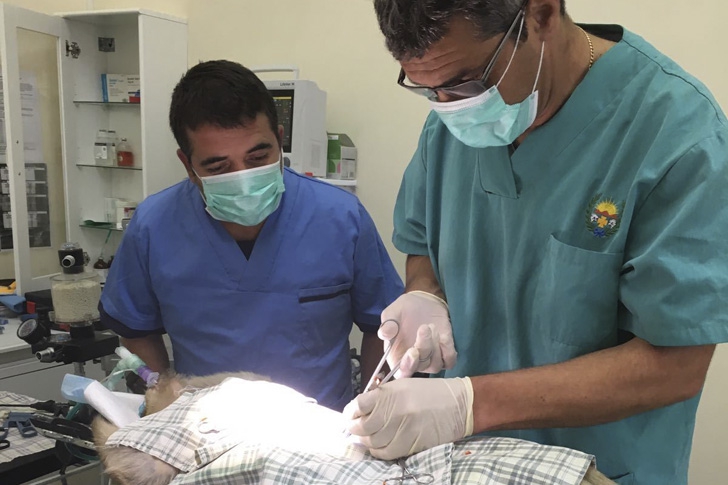 Operating on a female macaque.

WITH the recent change in the protection of the world population of the Barbary Macaque, which is considered to be an endangered species in the wild, Gibraltar has decided to manage its population without undertaking regular and sometimes difficult culls.

The control of the population, which is necessary in a small, densely populated area such as Gibraltar, is best carried out by other means, of which contraception is one. While contraceptive implants have been used for several years now, they are of limited duration and sometimes not completely effective.

From this autumn, the Macaque Management Team, run by the Department of the Environment and Climate Change has introduced surgical contraception by way of laparoscopy. Veterinarian Mark Pizarro has so far treated 15 female macaques from most of the groups found on the Rock.

They always select females who have already had one or more youngsters in past years, so that they are not denied the opportunity of becoming mothers, which is important in macaque society. The numbers of females sterilised in this way is also limited, so that there will always be some females within every group which will bear young.

This method will have the long-term effect of stopping population growth, while allowing social structures to remain and not threaten the continuation of the Gibraltar macaque population. As an additional management tool, this year has also seen the start of a programme to carry out genetic fingerprinting of the whole macaque population of Gibraltar.

Minister for the Environment and Climate Change Dr John Cortes was consulted in his personal capacity as a macaque conservation biologist with regards to the increased protection for the species, which highlights the importance of Gibraltar as a refuge for this primate, which is facing disappearance from its North African habitat.

Dr Cortes commented, “Having largely resolved the problem of macaques impacting on our built-up areas, which as I said at the time required a few years of patient work, we can now fine-tune our management methods so that all of us can once again start to think of our monkeys, not as pests, but as an asset of which to be proud.”