Arrests made as police clash with Legia Ultras outside Bernabeu 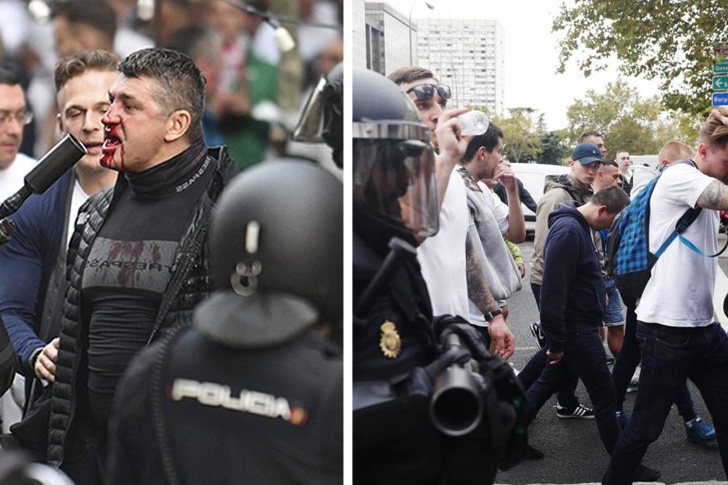 RIOT police had to bring an unruly mob of Legia Ultra supporters under control outside of Bernabeu Standium in Madrid on Tuesday evening (October 18).

The clash occurred ahead of the Polish side’s Champion’s League match against Real Madrid and mainly took place in the area of Calle Rafael Salgado.

Anticipating potential violence ahead of time, the Spanish police had set up an enormous security presence, which included around 1,500 officers and 700 private security guards. As the match drew nearer, a large group of supporters moved towards the stadium from the direction of the Plaza de Castilla. A police checkpoint was set up in the area, and some of the more belligerent fans began to throw bottles and attack the police officers. They also began to knock over fences and climb over hedges, and a stand selling sweets was completely destroyed.

The police were eventually able to bring the situation under control. Nine arrests were made and eight people were injured in the skirmish, among them three police officers, although none of the injuries required hospitalisation.

Earlier in the day three other Polish men were arrested after they allegedly attacked a waitress in a bar and stole her mobile phone.

Madrid won the game 5-1, with goals from Gareth Bale, Marco Asensio, Lucas Vazquez, and Alvaro Morata adding to an own goal from Legia’s Tomasz Jodlowiec.

Miroslav Radovic pulled one back from the penalty spot but it was a routine victory for Zinedine Zidane’s men.

The Foxes now have nine points from three games, one more than they have managed to rack up in this season’s Premier League campaign so far, and sit five points clear at the top of Group G.

Tottenham Hotspur could only manage a battling 0-0 draw away to Bayern Leverkusen, surviving a second half onslaught from the German team to leave them second in Group E at the halfway stage.