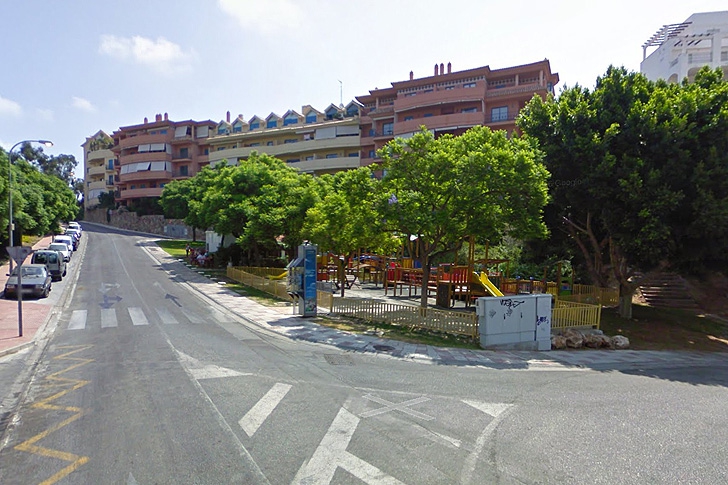 The park is at the intersection of two roads.

UPDATE: IT has transpired that the woman who died in the tragedy was still conscious when paramedics arrived at the scene, and underwent two separate operations before she died.

Meanwhile, the driver was imprisoned without bail by a Torremolinos court on Wednesday, October 19, while he is investigated for homicide by gross negligence, crimes against road safety and several counts of grievous bodily harm.

He is apparently a repeat offender with two previous convictions for drug and alcohol abuse, and he even completed a driver awareness course in order to regain his lost license in 2013.

A 35-YEAR-OLD Ukrainian woman was killed and six others, including a two-year-old child, injured after a vehicle careered off the road and into a childrens playground in Benalmadena at around 8pm on Monday, October 17.

The tragic incident occurred on Avenida Estrella del Mar, after the 44-year-old driver attempted to turn a corner at the street’s confluence with Ronda del Golf Oeste.

Witnesses described how he was “driving very fast,” and police have confirmed that he was three times over the legal alcohol limit.

As he took the corner he veered into the opposite lane and was then forced to swing off the road to avoid an incoming car, at which point he collided with occupied tables and chairs outside a snack kiosk next to the playground.

Several people who were in the park itself saw the Peugeot 206 coming and managed to avoid injury, but those sitting closest to the road were not so lucky.

According to witness reports the woman who died was carried along on the car’s bonnet for several seconds before she slid off and was run over. She was transferred to the Hospital Clinico in critical condition but died of her injuries on Tuesday morning.

The other six people hit by the car suffered minor injuries with the exception of one woman who broke her leg.

The infant is said to be “fine” and was not badly hurt.

The driver, who lives in Churriana and works as a gardener in Benalmadena, has been detained and is now likely to be charged with reckless homicide.