Best exercise for your dog 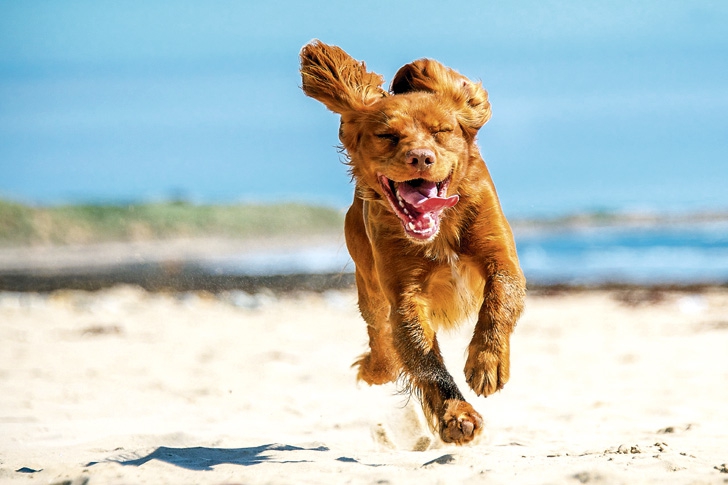 EXERCISE TIME: Best not to run on hard surfaces.

MOST vets will caution pet owners not to exercise a dog right after feeding him. This is certainly true of strenuous exercise, exercise which can make a dog throw up and can lead to gastric torsion.

A recent study by the Divisions of Nutritional Sciences at Cornell University proved that exercise after eating seems to burn up more calories by raising the body’s rate of metabolism.

After eating, many dogs will lie down to digest their food. While sleeping a pet will burn up a few calories in just keeping his heart and lungs going.

This sluggish behaviour can only encourage the animal to put on weight. It now makes sense to take your dog for a walk not more than a half-hour after his big meal of the day. This very gentle exercise will also stimulate his digestion. Then after a few hours have gone by, you can put him through a more demanding regimen of activity.

For smaller breeds, simply taking a dog outdoors to relieve himself constitutes a certain amount of exercise. Exercise assists but does not cause defecation and a dog does not need exercise to loosen his bowels unless he is ill.

The cheetah is the fastest land animal known and has been clocked in short bursts up to 60 miles an hour. Dogs in the wild do a lot of running but mostly when they are hunting or chasing prey. Taking a dog on a daily run is not necessarily in its best interest.

Dogs should never be run on hard surfaces like pavements but on earth. If you insist on having your dog jog then make certain the pace is a fast walk or trot rather than a run, and this should never be allowed in hot weather. Always check the dog’s feet after a run for cuts and rawness.

A dog can sweat through his feet pads, anus and tongue. He does not have the heat releasing mechanisms of many other animals. Dogs are susceptible to heatstroke and other related problems. Dogs that were bred for cold climates such as Huskies or Akitas have been transplanted by people to warm climates this is not natural and one can expect behavioural and health problems.

Dogs react to heat by panting or digging holes in the earth under shady trees or bushes. Locking dogs in closed cars can be fatal because a car heats and so do dogs.

Exercise raises your dog’s metabolism and boosts his temperature, which in turn can turn to heatstroke. For obese dogs the problem is worse. Never exercise a dog in the heat of the day and keep his weight under control. It is also a good idea to give your dog his water dish to enable him to drink before a walk.