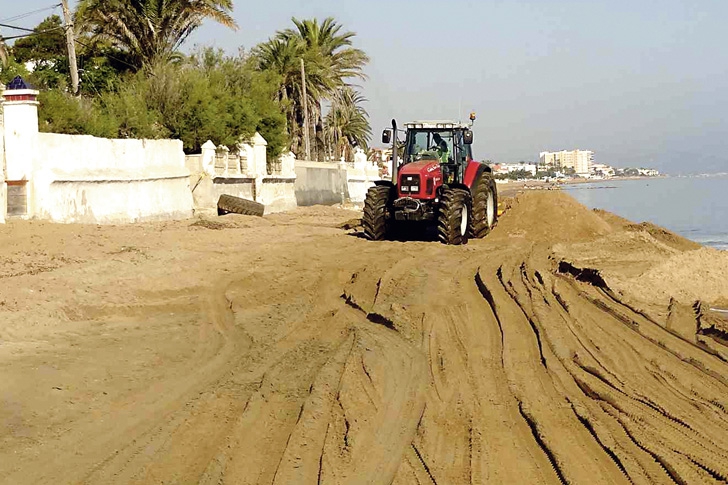 Residents of an urbanisation on Blay Beach in Denia are up in arms over controversial plans to construct a new luxury housing development on the Les Marines coastal strip.

The El Retiro residents claim the area has suffered from years of over-exploitation by the town council and that the beach has become so eroded it can no longer support additional development.

This was exemplified during last week’s heavy rains when a sizeable swell flooded both the beach and the gardens of many homes located on the prized ‘first line’ of the beach.

Each spring the beach must be reinforced with tonnes of sand brought in from other parts of Denia, such as l’Estanyo, while the national environmental ministry consider it should not be subject to further encroachment because of its reduced dimensions.

This has done little to suppress the ‘Residencial Las Olas’ housing project, however, which will contain the tallest buildings along this stretch of coastline should it go ahead.

One of the primary concerns appears to be that the high waterline lies inside the boundaries of the scheme, meaning constructors will have to design a special ‘infrastructure’ to protect homeowners, according to El Retiro spokesman Jose Morillas.

Morillas and members of his newly-formed platform argue that the project violates the Coastal Act, legislation which dictates new buildings must be constructed a certain distance from the water’s edge and beach.

He also revealed that the mayor, Vicent Grimalt, and town planning councillor, Maria Josep Ripoll, are aware the scheme does not conform to the authority’s own plan for sustainable development but that “once again” the planning department are “trying to reclaim land from the sea; a case of history repeating itself.”

The residents are demanding that a limit on constructing on the first line be written into the town’s updated General Plan, which is to be released shortly.

“Why does the municipal council not act accordingly, now that it is time, and avoid a new grievance by protecting Blay Beach from more tall buildings?” says Morillas. “Now is the time to act, because the draft of the new General Plan is on the table.”