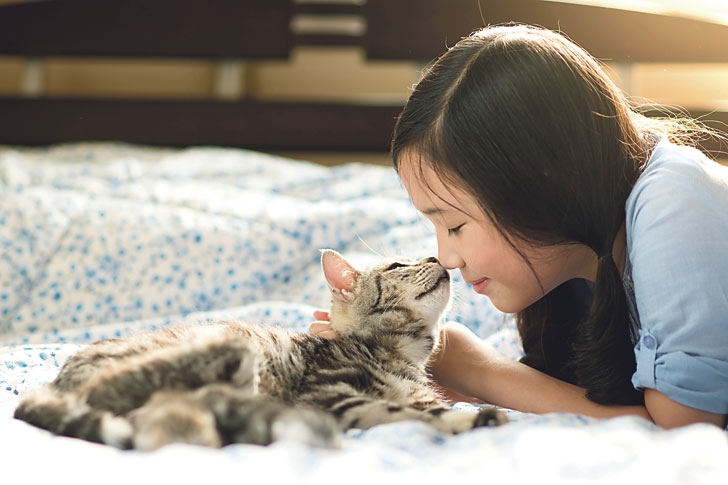 WHY do cats go to the one person in the room who doesn’t like cats?

When a cat enters a room full of people who are staring at him, he becomes very uncomfortable. Then he notices that one person is totally ignoring him, the person who dislikes cats for whatever reason. The cat goes to that person to seek a safe haven from those who are fawning over him or intimidating him.

Why do cats rub against your leg?

When a cat rubs his head or the side of his chin against you, the furniture, or any object, he is actually depositing his scent on them as part of territorial marking. He uses his glands on his forehead and around his mouth and chin. These glands produce chemicals called pheromones, which he transfers by rubbing against objects. Cats can tell how long ago a scent was left and how much attention they need to pay to the warning.

What does it mean when my cat exposes its stomach?

A rare form of greeting, the ultimate compliment that a cat can pay to a human. This body language shows how much he cares for you and how comfortable he is around you. Totally exposing the stomach reveals how secure he feels, because the stomach area is the most vulnerable body part of the cat. He can be asking for a caress, inviting you to play with him, or may want the stomach area stroked. If he sleeps on his back this way, his trust in you is in the stratosphere.

Why does my cat knead?

That loud purring followed by the sharpening of claws on some soft spot of your body is called milk-treading. When you relax and sit quietly, you’re giving your cat the same signal he got from his mother when he was a kitten which meant his mother was ready to let him suckle. A nursing kitten instinctively uses his paws to draw out the milk, gently pushing on his mother’s stomach to increase the milk flow. When older cats behave this way, it’s a good sign that they’re happy, content, and probably recalling their kittenhood.

What is that noise my cat makes when it sees a bird (or squirrel, etc.)?

The odd behaviour that resembles teeth-chattering is usually produced when a cat sees something he wants but can’t get to it. Though his mouth is slightly open (the lips pulled back and the jaw opening and closing rapidly), it’s not a form of communication. The noise made is a combination of lip-smacking and teeth-chattering as he gets more excited. He may emit small bleating noises like a baby goat. So far, none of this is believed to have any function.

If cats are so smart, why are they so hard to train?

Actually, cats aren’t that tough to train; they just refuse to perform for a pat on the head. They’re indifferent to the process and learn tricks only because they want to. Because they’re not renowned for their obedience, we think they’re defiant. However, if there’s something in it for them, they are quick to learn. Cats learn by association. You can’t bribe them with sweets because their taste buds don’t have any sweet receptors (as meat eaters they don’t need them). They can’t tell the difference between a sugar solution and plain water. As with all animals, coaxing them includes much love, patience, consistency, authority, repetition, and reward … but never punishment. Dogs are trainable because they are born to follow leaders; cats, on the other hand, take care of themselves.