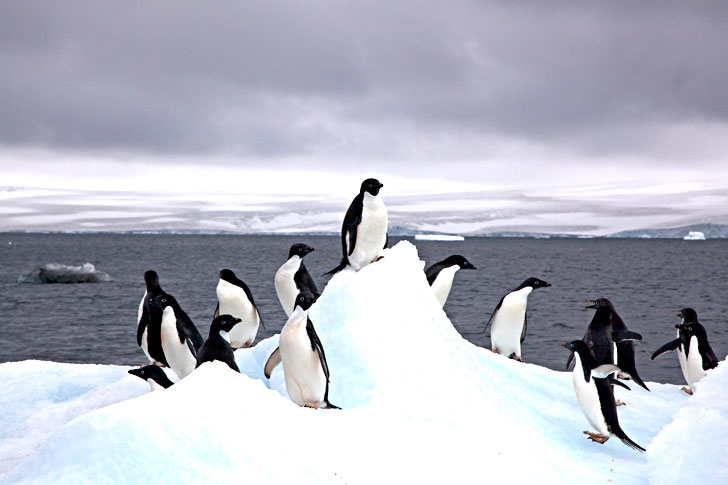 Adelie Penguins in the Antarctic.

SHORTLY after a report was issued by the World Wide Fund for Nature which postulated that some 50 per cent of all of the world’s animal, bird and fish species had been wiped out over the past 40 years, a bit of good environmental news has emerged from the Antarctic. A number of countries lay claim to parts of Antarctica and have established scientific bases across the continent with the intention that the area be used for research rather than be exploited for any major mineral deposits that may exist there. Unusually, the USA which isn’t renowned for ‘green projects’ in conjunction with New Zealand has been promoting the concept that the Ross Sea (named after British explorer James Ross who visited in 1841) to the south of the Antarctic landmass should be designated a marine protected area (MPA) which would mean that no commercial fishing could take place in the area. Whilst it was intended that this should be a permanent dedication, both China and Russia who have large fishing fleets that visit the waters objected and negotiations have been taking place to find an acceptable compromise for years. Now these last two countries have agreed to the establishment of the MPA but for a period of 35 years only, although this may be extended in due course. An area equivalent to 600,000 square miles will now be protected which means that there will be an opportunity for a number of different species to recover lost ground and should ensure an increase in the populations of Adelie penguins, Minke whales and Antarctic petrels whilst Krill, tiny crustaceans which are an important part of the marine food chain should be able to increase their breeding patterns so that the tiny adults are picked up by sea currents and are carried around the world. Slowly but surely, different countries are recognising that over fishing and climate change are threatening marine diversity and fish stocks in waters all over the world and the establishment of these MPAs is becoming more widespread, with more than 30 countries creating these areas. Britain has declared that each of its Overseas Territories will also create their own MPAs whilst allowing some tourism and controlled fishing. It is encouraging that despite the current problems between Russia and the NATO countries that in some areas at least, all parties are considering the way in which the which the world has been over-exploited and even though the current decisions may be made due to enlightened self-interest, at least some positive and cooperative action is being undertaken.