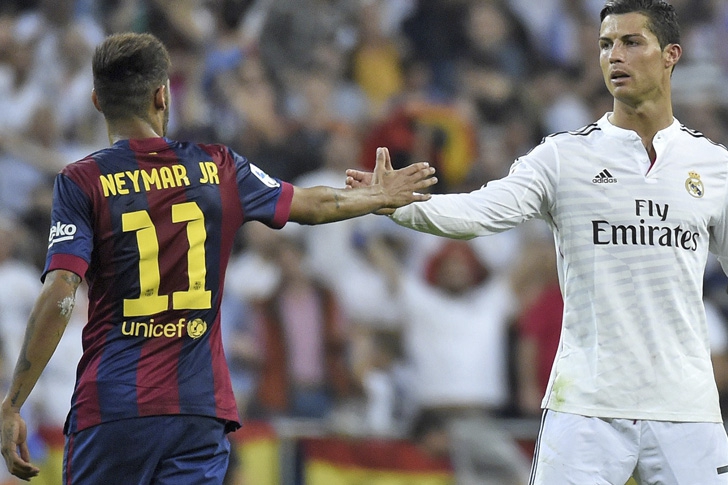 RIVALS: Neymar (left) and Ronaldo have both signed new deals with their clubs.

PERMA-TANNED striking sensation Cristiano Ronaldo picked up Marca’s Alfredo di Stefano award for being the best player in La Liga during the 2015/2016 season on the same day that he signed a glistening new five-year contract with Real Madrid reported to be worth a cool €400,000 per week.

The Portuguese bagged 35 goals and 11 assists for Los Blancos last season, although his team could only finish second in the final standings behind a rampant Barcelona.

He also scored 16 Champions League goals as Real won the trophy for the 11th time, before emerging victorious from Euro 2016 with Portugal, the country’s first major title.

Club president Florentino Perez referred to Ronaldo as a ‘living legend’ during a press conference to announce the new deal, while the player affirmed that this will not be his last contract.

“I want to stay here and finish here,” said the 31-year-old. “It is not my last contract, I want to keep going until I’m 41 but now the most important thing is this special moment that makes me happy and my family, too.

“I’m at the best club in the world. Everyone knows what my thoughts are. I want to continue being the best. I want to wear this shirt with pride. I’m sure I’m going to contribute the same over the next five years as I have in my time here, scoring goals and winning titles.

“I’m very happy. It is a dream come true to extend my contract here at the club. All I want to do is continue rewriting history here at this club.

“No one knows what the future holds but I would like to end my career at this club. This is my penultimate contract. I want to be here for many years to come.”

Elsewhere in Madrid, a Spanish High Court judge has said that 24-year-old Barcelona and Brazil superstar Neymar, his parents and two of the Catalan club’s executives should stand trial over alleged corruption charges.

The case had been dismissed several months ago but was reopened on Monday, November 7, with the complaint stemming from Brazilian investment group DIS, which owned a percentage of the player’s transfer rights at the time of his 2013 transfer from Santos to Barca.

DIS was allegedly entitled to 40 per cent of the transfer fee, but claim they were ripped off after the clubs concealed the true total.

Barcelona have already agreed to fork out €5.5 million due to tax irregularities in the deal, and prosecutors now have 10 days to formalise their request for a trial, while all the accused parties maintain their innocence.

Neymar signed a new five-year contract with the Spanish champions in October.