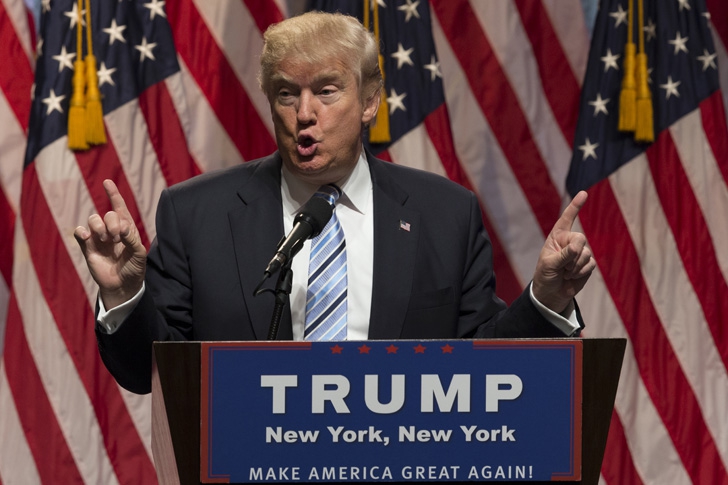 DEFYING THE ODDS: Donald Trump is the USA president elect.

AS PROMISED it was ‘Brexit plus plus plus’ as Donald Trump defied confident media predictions, storming to victory in America’s 2016 presidential election and a seat in the Oval Office where history will certainly be made.

Hilary Clinton called her bitter rival in the early hours to concede defeat after Trump swept the key battleground states of Ohio, Florida and North Carolina.

Her New York campaign headquarters was eerily empty as the throngs of expectant supporters drifted away, crashing Canada’s immigration website in their wake.

Clinton the candidate did not speak. Eventually her campaign manager John Podesta, whose hacked emails laid bare the black rot at the heart of the Democratic Party, appeared to implore her remaining supporters to ‘head home and get some sleep’.

Needless to say Trump, the nation’s new president-elect, was in bombastic form after stealing across Manhattan from his Trump Tower lair to the Hilton Midtown hotel for his victory speech.

Fascistic chants of ‘U-S-A, U-S-A’ greeted the celebrity real estate tycoon who pledged to ‘be president for all Americans’.

That pledge is unlikely to be achieved.

Events today will move incredibly swiftly. There are already reports of protests in Oakland, Los Angeles, New York and Portland. After one of the most fractious elections in the country’s history exposed its deep cultural divisions, protest and political violence can be counted on.

Though well ahead in the Electoral College, with 276 votes to Clinton’s 218 at the time of writing, Trump is only marginally ahead in the popular vote, which is split 47.8% to 47.4%, marking an evenly divided nation.

In Congress it is a different story. The Donald is in possession of the trump card that Obama never had – a pliant Senate and House that will be inclined to support his policies, however outrageous they may seem.

The Republican sweep means Trump will also be able to push through a conservative judge to the Supreme Court, thus ensuring that he is unburdened by many of the checks and balances that plagued Obama.

Trump has won ‘bigly’ as he said he would. And in doing so he has almost singlehandedly showed America to be more bitterly angry with the status quo than Washington, the media and indeed the world ever expected.

His victory heralds many things – a brash middle finger to the ‘establishment’, the final days of truth in national discourse, a global order increasingly governed by authoritarian populism, and a radical shift at the very heart of the world’s greatest power.