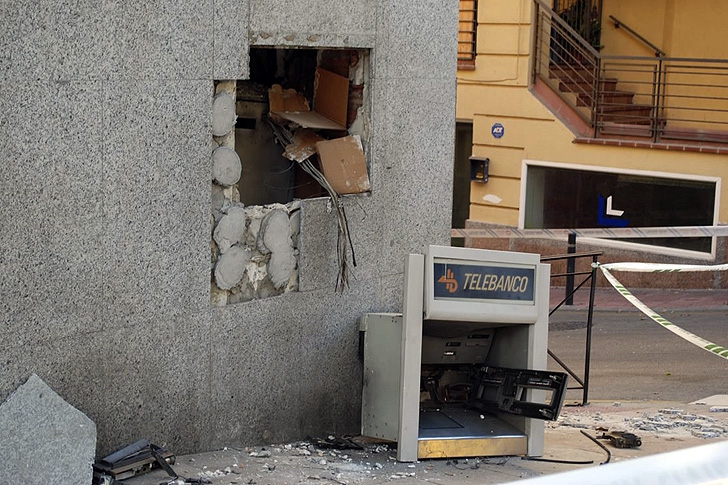 EXPLOSIVE SITUATION: The bank in Cala del Moral was forced to close for almost two months following one of the attacks.

UPDATE: Three of the four men were officially imprisoned by a Malaga judge late on Friday, November 11, with the number of robberies they are accused of committimng having been raised to 18. More to follow.

TWO British men are among four people arrested for their alleged involvement in the wave of cash machines robberies which has hit Malaga in recent months and has been covered extensively by the Euro Weekly News.

The gang are suspected of blowing up at least thirteen machines throughout the province, with varying degrees of success.

For example, an excessive amount of explosives were deployed during the first attack on a Toys R Us store between Malaga and Torremolinos, sending burned bank notes billowing around the car park.

They later managed to pull off more controlled explosions, using either home-made explosives or acetylene gas to blast the machines open before making off with undisclosed amounts of cash.

The initial attacks took place in Malaga city and Cala del Moral, with the latter resulting in a branch of Banco Santander being blown to pieces, before the looters carried out raids in Alahurin el Grande, Monda, Marbella, Guaro, Ojen, and most recently Algarrobo and Mijas.

In some cases, the bandits even left additional packages of explosives as traps, or scattered nails in surrounding streets in order to hamper pursuers.

They targeted machines owned by the banks Santander and Unicaja, with complex explosives “that required the work of an expert” used to blow open the former, and gas the latter.

The British pair, who have not been named, were detained during a 4am raid on a property in Calahonda on Wednesday, November 9.

Investigators also seized what is described as “a lot” of cash, electrical wiring, gas canisters, and hand grenades “in perfect condition,” plus unspecified amounts of cocaine and marihuana.

The other two detainees are both Spanish, and include the owner of a vehicle workshop in San Pedro de Alcantara who is suspected of supplying the acetylene gas, plus another who is thought to have acted as an intermediary.

Further arrests are apparently imminent with a Spanish woman currently under investigation, while homes in Ronda and Coin have also been searched.

The investigation remains open as police attempt to confirm whether more than a single gang was responsible for the audacious robberies, or if the arrested parties should be charged for all 13 raids.