It’s the clown and the heiress 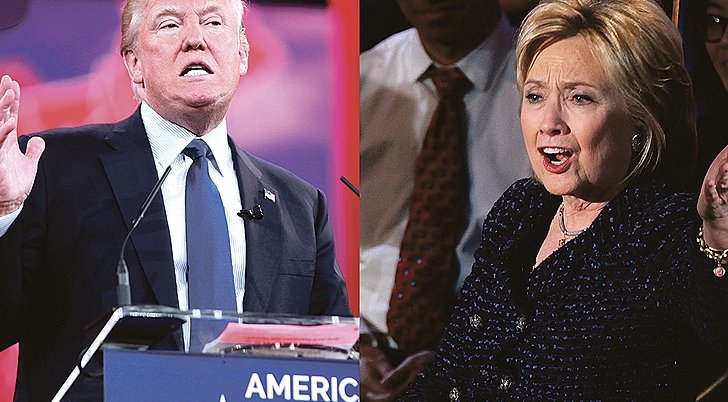 AMERICAN ELECTION: Donald Trump has been successful in his bid over Hillary Clinton.

I’m writing this as the news breaks that Donald Trump has seemingly been successful in his bid for the presidency of the United States of America. With the 20/20 vision that hindsight gives you, we should ALL have seen it coming. ‘The nation is in shock,’ ‘I can’t believe it,’ ‘It’s going to take a while to sink in.’

Really? I wish I’d put a bet on it. I didn’t want him to win, I would have loved a woman to have won, although I’m not sure that woman should have been Hillary Clinton.

In fact, given the two choices that the American public had, which one would YOU have chosen to vote for? Neither of the options were good. An arrogant, bumbling, misogynist, racist millionaire with wandering hands, or a self-aggrandizing do-gooder with a political pedigree who threw a victory party before the polls had even closed.

Putting aside the electoral college system Trump won the popular vote as well. Had Michelle Obama or Bernie Sanders been running then maybe the result would have been different, but the American public have voted very clearly that they do not want the old boys (or girls’) club in charge any more. The result is the product of a nation that has been denied for too long, just as the Brexit Leave vote was for the UK.

You can’t expect nations to go along blindly voting for the same thing all of the time if the conditions they long for don’t materialise. Politics has been changing since the crash in 2008, moving from the centre to further and further left and right.  I don’t like it, the extremists are taking advantage of our baser feelings and needs.

But this is democracy in action, and what the people need are more options to vote for. If all they have is a clown or an heiress to choose from then they’re going to choose the one that appeals to them the most.

The current political systems are too simple in their construction to reflect the different opinions of the public.  Just as the UK voted to leave Europe as a reaction to the internal situation in the country and then realised with surprise that their vote did actually count and was important, I guess we may see some feedback from the States in the coming days echoing the same.

Next to come we have France and Germany who will both go to the polls in the next year; I wonder how their politicians are feeling today? Perhaps modern politics will find itself with much more than a two party system, I can’t imagine how they might make any final decisions, but there must be a way to reflect fairly how normal people are feeling and what we want.

Let’s hope that these alarming situations will prompt change in our political systems. The new world order is shaking itself down.  The people have spoken, and I can’t wait to see how the establishment will reinvent itself.