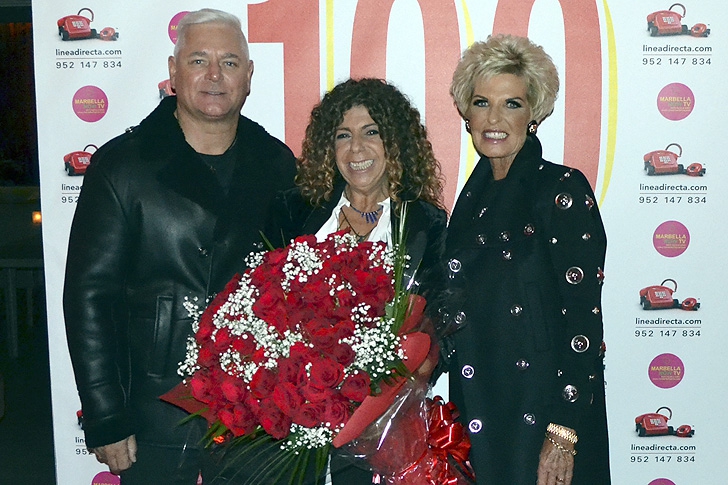 IT hardly seems possible that the vivacious and irrepressible Nicole King launched Mi Marbella, the first English language radio show on RTV Marbella in collaboration with the Marbella Town Hall some two years ago, and she then followed it up with Marbella Now, an English TV magazine weekly programme on RTV Marbella, which airs on Thursdays at 7.30pm.

With her mission to try to entertain and educate English-speaking viewers about the wonders of Marbella she relies on a series of guests both locally resident and visiting in order to keep each episode fresh and interesting.

Something must be working as on Tuesday November 15, she was delighted to welcome a huge number of present and former guests as well as sponsors and supporters to Joe’s Bar in the exclusive Puente Romano Hotel to celebrate the 100th edition of her TV programme.

With an estimated 140 nationalities in Marbella, a large percentage were more than happy to attend the party which was sponsored by insurance company Linea Directa and as each person or couple arrived, she was on hand to have her photograph taken with them.

Amongst those spotted at the reception were Princess Marie Louise of Prussia and Count Rudi von Schönburg, Michel and Steven Euesden, Kristina Szekely, Council and RTV representatives, Patrick Grant lawyer and regular contributor, Giles Brown and Steph Miller from Talk Radio Europe, Lily van Tongeren from the Triple A charity, Georgina and Andy Shaw, Fiona Catchpole, Line Lyster, Dillyz and a host of other members of the Marbella community.

Nicole was in sparkling form moving from guest to guest, escorted by her husband Bobby and following their arrival, guests were invited to enter the main bar where they were served with drinks and substantial canapés (for which John Thomson and his hard-working team are to be congratulated) whilst being entertained by the voices of the ever more popular Mr Maph and Simmone.

Apart from her work on radio and TV, Nicole organised the first ever ‘United Nationalities of Marbella Now Summit’ at the Laude International College in San Pedro in March of this year to discuss key issues with the international community in Marbella and a further summit is planned for 2017.

When congratulated on the fact the TV programme was celebrating its centenary, Nicole said “It’s certainly been a labour of love” and said how delighted she was that so many people from many communities and disciplines had taken the time and trouble to join her.

Although she and Bobby spent some time in Madrid, they are well established back in Marbella where Nicole grew up and not only consider themselves proud Marbellís but enjoy promoting the city locally and through the RTV Marbella website.

It is easy to warm to Nicole King when you meet her as she is so genuinely cheerful and bubbly, always looking for the positives, yet ready to espouse good causes and charities as well as spending a great deal of time promoting a spirit of community.

Mi Marbella is on 107.6FM from 4pm to 6pm Monday and Wednesday and repeated 8pm to 10pm on Tuesday and Friday.