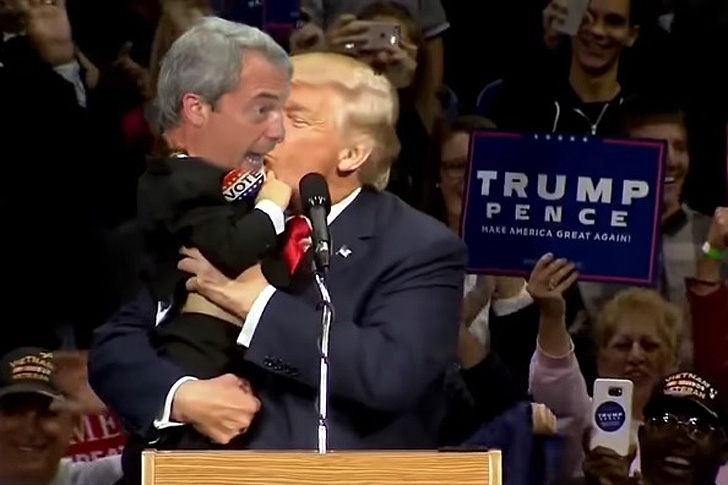 A GUSHING Nigel Farage told BBC Breakfast this morning that he had been awake since 2am GMT when president-elect Donald Trump wrote on Twitter that he would do a ‘great job’ as UK ambassador to the States.

“Many people would like to see @Nigel_Farage represent Great Britain as their Ambassador to the United States,” Trump tweeted. “He would do a great job!” wrote the man who would be president, and who has a fetish for social media and exclamation marks.

The cringe-worthy transatlantic romance is quickly becoming a headache for British prime minister Theresa May, who is jostling behind Farage for attention from the future leader of the free world.

While Farage was the first foreign politician to meet the new president-elect, travelling to New York with his Brexit brethren, May only managed to speak to Trump on the phone after the leaders of nine other countries, including Turkey, Ireland and South Korea, had their call.

Trump signed off his conversation with May by saying “If you travel to the US you should let me know”, the American equivalent of ‘let me know if you’re ever in this neck of the woods’.

Trump’s team have reportedly voiced concerns with Farage over May’s executive squad, including foreign minister Boris Johnson who described Trump as ‘unfit’ to be president and said he’d invite him over to London but ‘wouldn’t want to expose any Londoners to any unnecessary risk of meeting Donald Trump’.

For his part Farage said he was flattered to be suggested as a potential ambassador, just as Downing Street reminded the world that the position was already filled. Christopher Meyer, a former ambassador to the US, wrote that the role is supposed to represent British interests in the US, not the other way around.

Meanwhile Trump took to Youtube to tell the world that on his first day in office he will withdraw America from the Trans-Pacific Partnership (TTP) trade deal, describing it as a ‘potential disaster for our country’.

TPP is a proposed Pacific alliance to unite 12 countries in a trading pact designed to cut tariffs and counter Chinese economic strength. It has been strongly opposed by both the populist right and socialist left as erosive of national sovereignty.