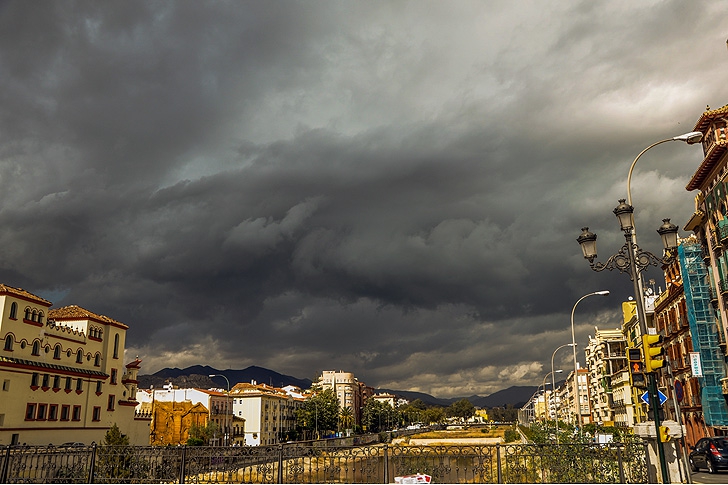 THE raincoats and the umbrellas are out in full force now that intense rains have rocked Malaga Province, transforming the normally sunny area into a wet, wild, and windy place to be, at least for the time being.

As was predicted last weekend, the heavy rainfall that has been doing the rounds in Andalucia has made its way to Malaga Province, and the result was far from a light sprinkling. The precipitation that poured down yesterday was by far the heaviest amount that the area has experienced so far this season.

Yesterday, on Monday November 21, the storm clouds were particularly concentrated in the area of the Serrania de Ronda and el Valle del Genal, where 70.1 litres of rain per square metre were registered in Pujerra over the course of the day. However, this is nothing compared to the record which was registered in Cardeña over in Cordoba, where a whopping 122.2 metres square of rain were unleashed from the skies as the area was hammered relentlessly between 12am and 8pm on Monday.

According to the predictions of the State Meteorological Agency, instability and unpredictability will be the order of the day all week long in Malaga Province. The rain is expected to continue today (Tuesday November 22), particularly in Axarquia, where the yellow alert has been raised for strong rain which is expected to continue until approximately 3pm. Meanwhile in the rest of the province, relatively strong precipitation is expected in many areas, although as the day progresses it will generally slow down.

Wednesday (November 23) is expected to be a transition day which will then segue into more storms on Thursday (November 24), which unfortunately for beach-goers will only the opening event for a weekend characterised by heavy rainfall.

The rain over the next few days is expected to be accompanied by a noticeable drop in temperature, with the minimum in Malaga City and the coastal stretch of the province being predicted to be about 7 degrees. Those living inland, however, may want to break out their winter coats, as the temperature in Ronda is going to hover at only 1 degree above zero during the nighttime over the next few days. Antequera, the more northern parts of Axarquia, and the Valle del Guadalhorce are also expected to be on the much chillier side of things, with a predicted minimum of 4 degrees. Throughout the province, temperatures will generally appear colder than they really are throughout the day, largely due to the lack of sunshine.

Although inland communities were generally the most affected by the rain yesterday, Marbella was the most washed out part of the Costa, as the city was lashed with about 33 litres per square metre, whereas Ojen received a hefty 53.5.