WATCH: Kangaroo-punching zookeeper will not be sacked 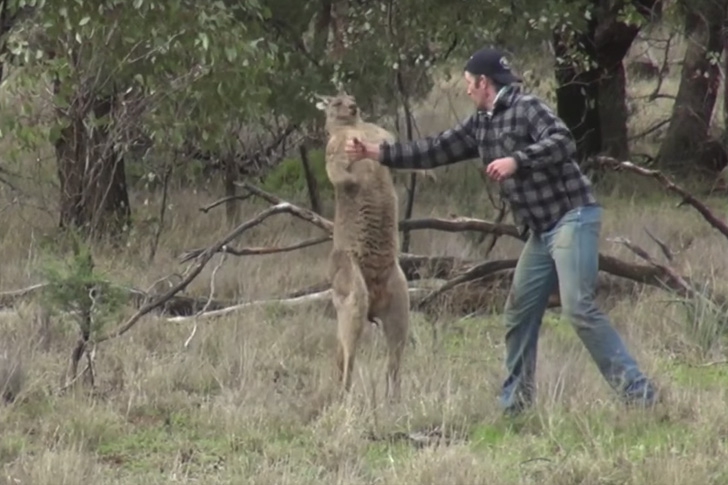 MADDENED MARSUPIAL: Tonkins confronted a kangaroo after he spotted it grappling with his dog.

AN AUSTRALIAN zoo has indicated that it has no intention of sacking an elephant keeper who was filmed punching a kangaroo in the face.

Greig Tonkins, who is an employee of Taronga Western Plains Zoo, was on a pig hunting trip when a wild kangaroo grabbed his dog by the chest and scruff of the neck.

In the video, which had been viewed millions of times by the morning of Tuesday December 6, Tonkins is seen springing out of a white vehicle and rushing to the aid of his beleaguered pooch. He circles around the two animals until he is within striking distance of the male kangaroo. Distracted, the buck lets go of the dog and comes face to face with Tonkins. The kangaroo then assumes a fighter’s stance before moving aggressively towards Tonkins, at which point the zookeeper gives the animal a hefty wallop in the face. The kangaroo appears stunned, as it throws its front legs up and then stares Tonkins down as he backs away and heads for the safety of the vehicle.

Although the video is accompanied by a voice-over narration which argues that Tonkins’ actions were done out of safety concerns for himself and the dog, the footage has sparked an outcry from various animal rights associations.

Australian Campaign Coordinator from People for the Ethical Treatment of Animals (PETA) Claire Fryer stated that “punching kangaroos in the face is neither brave nor funny” and argued that Tonkins’ behaviour was in fact illegal. Meanwhile, representatives from the Humane Society International Australia argued that the zoo should sack Tonkins as a result of his treatment of the animal.

The zoo however has said that it plans to stand firm behind Tonkins, who has been a member of staff for six years. Zoo representatives indicated that they had been contacted by many people who had expressed concern for Tonkins’ well-being. The zoo went on to point out that it is opposed to animal abuse as well as using dogs to hunt, but also highlighted Tonkins’ professionalism and hard work during his time there, and indicated that it has no intention of terminating his contract.