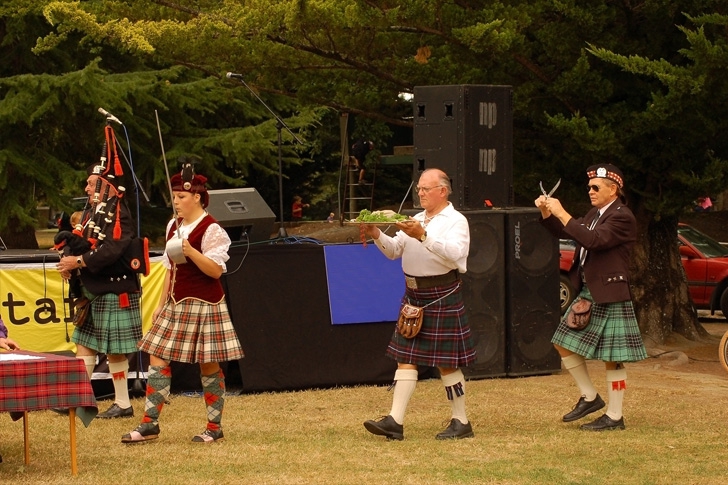 Piping in the Haggis.

SCOTS around the world will be toasting the life and works of their most famous son Robert (Rabbie) Burns on January 25, 2017 who wrote some of the greatest Scottish poetry of all time.

The Beach House in Marbella will be hosting their own Burns Night of Friday January 27, where they will follow tradition with a number of courses associated with the poet which naturally includes haggis, neeps (turnips) and tatties (potato).

Jeff Mynott, head chef at the Beach House is pleased to have the assistance once again of guest chef Greg Hudson from Dunfermline and between them, they have created a proper Burns Night feast at the very reasonable price of just €39.95 plus IVA.

The meal will start with an amuse bouche of traditional Cock-A-Leekie soup followed by three great courses including the haggis but for those of a less adventurous nature, there will be a fish or pork alternative.

There will naturally be a piping in of the Haggis undertaken by Stuart Clarkson and the traditional address to the haggis will be made by Bob Hamilton with the whole night being punctuated by traditional Scottish classics which may well include Auld Lang Syne.

Scotland’s National Poet was just 37 when he died, but his writing in both the Scots language as well as English made him almost a household name at a time when communication was difficult and illiteracy was still quite high.

It took just five years from his death for the first Burns Night to be celebrated and he is now well-known for his blunt political statements as well as his more poetic writings. Not perhaps quite so well promoted is the fact that he had a healthy interest in female companionship and fathered at least 10 children, many of whom died in infancy.

If you are Scottish, have Scottish ancestry or just want to enjoy a great evening, do visit the Beach House website www.thebeachhousemarbella.com to make a reservation for Burns Night or indeed any of the great evenings they have planned following their re-opening on December 30 which features La Negra Mayté Duo.

The Beach House is open for breakfast and lunch every day and dinner on Friday and Saturday nights during the winter months and naturally there will be special events on New Year’s Eve and New Year’s Day.