Don’t sleep – there are snakes! 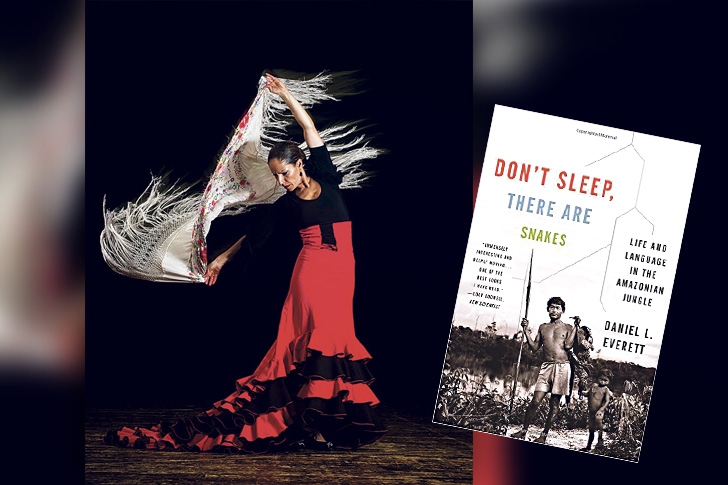 A GOOD TIME: To learn a little bit about flamenco. - GOOD READ: Forget the cover.

YUP, a really good read and it’s not about what you might think. It’s good to start the new year attitudes with breaking all codex regarding book buying. Forget the picture on the cover and just buy the title.

New Year’s resolutions can be that way. I’ve broken more annual promises than I can remember making. Don’t start the year off badly with self regrets. Just get on with living and marching in the direction you want to go – forget the regulations, even self-imposed ones and roll – your way.

So, the book. I know you’re dying to know. Well the word ‘snake’ is mentioned only briefly five times in the first 225 pages. Not the adventure story I had yearned. In fact, get this, it’s the story of a missionary that goes to the loneliest place in Brazil to learn the obscure language of a forgotten tribe called the Pirahã (Pee dah han).

They reside in the deepest of the most forgotten jungle. Colonel Fawcett could easily still be there. An indigenous nation that could only speak in the present conjugation tongue, couldn’t count, as they had no number system; had no words for colour, had no history nor mythological background. There certainly must have been better groups for the academic scrutiny, yet the author spent 35 years learning their language so he could produce them a Bible in their own language (in which 95 per cent of the resident souls can’t read anyway).

Well, the missionary soon lost faith in his own God when he observed how peaceful, jovial and kind the tribe always lived. “This pervasive happiness is hard to explain, though I believe that the Pirahãs are so confident and secure in their ability to handle anything that their environment throws at them that they can enjoy whatever comes their way,” writes the author.

One for the bin? Nope, the writer has a gift for understanding their rare language but also interpreting their life styles as a Grammatik reflection about how they view the world. And, whether or not man’s cognizant understanding of his world is ruled by his words that make up his communal speech. Heavy thinking concerning an end of the world cul de sac ethnic group.

The month of January is a good time to experiment with some new reading; away from your usual rut exposing you to novel thoughts and deviant spiritual routes. It’s a good time to re-examine how the pyramids were built, why and by whom. Or learn a little about flamenco, the toros or better yet the pre-history of Spain, the Argar culture that dominated this area and extended far to Sevilla. You want snakes? Look under your bed, or better yet, mine.