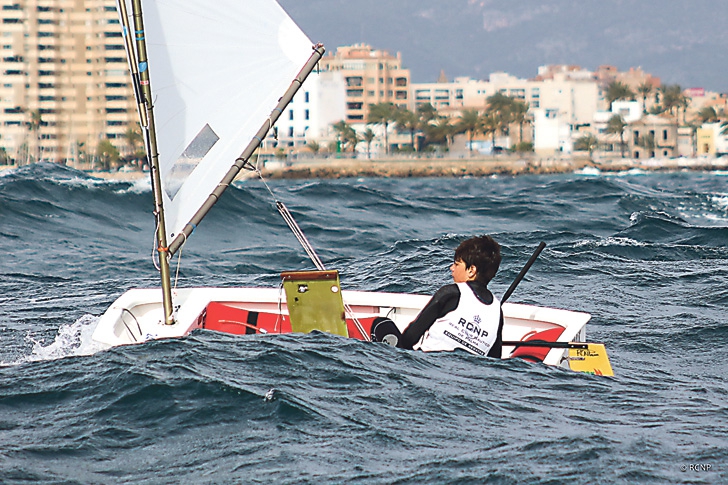 Battling the winds in Palma.

IN what was a record entry of 302 sailors, the Pro-Rigging Trophy organised by the Real Club Nautico de Palma (RCNP) over February 11 and 12 proved to be a really exciting fight against the other sailors and the wind.

With gusts reaching 22 knots and coming from the south east, the demanding regatta tested all of those taking part and the winds were high enough to even surprise many of the experienced mariners.

The Optimist class had to be divided into two groups due to the large number of participants and Jordi Lladó, of the RCNP, was awarded the victory in the absolute category (Sub 16) after being involved in an intense battle with Nacho Baltasar, representative of Club Nàutic de Sa Ràpita with just a single point dividing them.

Macià Alemany and Toni Bauzà of the Port d’Andratx sailing club (CVA) faced no real trouble in the 420 and won the first four races, out of five and had a 10 point lead over Melssion Rosselló and Xesc Mulet (RCNP), who won silver.

Catherine Havenga (RCNP) won two of the five races and  was second in two others as she fought against Carlos Plomer who stole victory in the strongest winds of the championship.

Mario Plomer (CVA) and Ramiro Foguet (RCNP) fought each other in one of the most exciting encounters in the Laser Radial class, with both knowing that the win could be decided on the smallest of tactical decisions and in the end, gold went to Mario Plomer, followed by the sailor from the RCNP and most successful woman Aina Bauza was placed third.

Finally in the Snipe, Pablo Balaguer and Fonso Comas pipped RCNP rivals Teo Matheu and Luis Fernández at the post whilst Hugo Ramón and Natalia Díaz were awarded the bronze medal.

The host club was delighted by the number of participants and thanked all who had been involved especially the sponsor, but also made special mention of the 11 sailors from the Club Marítimo de Mahon who had journeyed over to take part in the regatta.