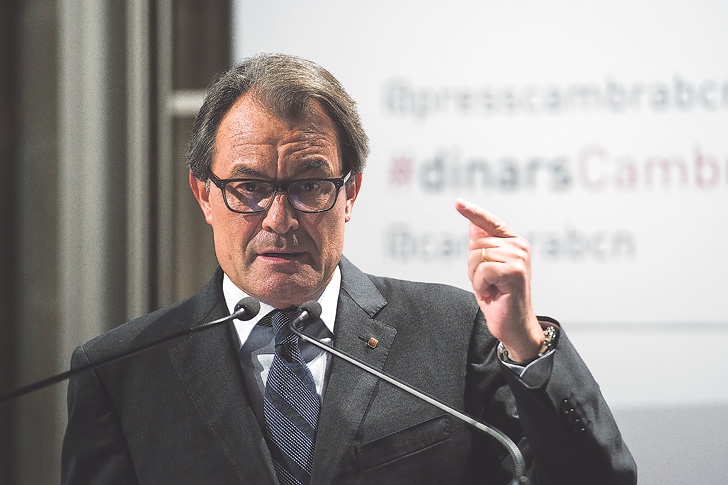 INDEPENDENCE-OBSESSED Artur Mas was a noisy and ineffective president of Cataluña.

His party’s majority shrank during a series of snap elections called to buttress the independence cause and the last in 2015, planned as a plebiscite, was a fiasco.

The CDC had to embrace the anti-system CUP party in order to govern and that came at a price, as Mas had to resign before the anti-everythings would cooperate.

Now the ex-president is on trial for breaking the law with a pseudo-referendum in 2014  which, ironically, did not produce the pro-independence majority Mas expected.

Current president Carles Puigdemont hinted that prosecuting Mas and others implicated in the 9-N fiasco will accelerate a unilateral declaration of independence.

Only an anti-Constitutional referendum can resolve a messy situation that can only get messier.  It might be illegal but what else can prevent at least 50 per cent of Catalans from being railroaded into independence?

FINANCE minister Cristobal Montoro once declared that he wasn’t in politics to make people happy.  He’ll make them even unhappier if he goes ahead with his rumoured plan to bump up tax on sugary drinks.

Not so much a Nanny State strategy as one that Montoro knows will rake in the euros as doting parents continue buying Coca Cola and Fanta for wheedling kids who are now the fattest in the EU.

JOAQUIN GIMENEZ has been a Surpreme Court judge since 1998.  Before that he presided the provincial High Courts of San Sebastian and Bilbao during the worst of the ETA years.

Gimenez is in favour of moving ETA prisoners to Basque region prisons, believing this would contribute to their reinsertion into society.  Asked how the judiciary could assist the winding-up of ETA, Gimenez answered that justice means pacification, substituting individual vengeance with appropriate retribution.  “It’s not here to put rocks on the road,” he said.

ETA has not killed in five years, but Mariano Rajoy and his government have been unbending in their response to the former terrorist group.  And rocks still scatter the road to total pacification with an occasional trace of vengeance, too.