A great restaurant icon has passed away 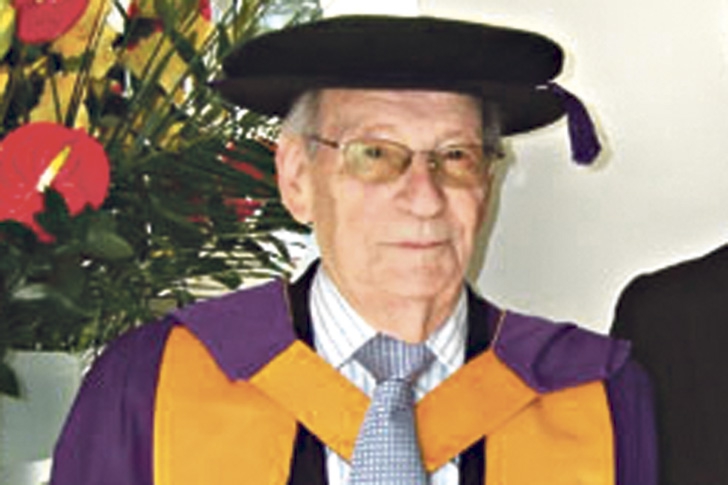 Much- respected as a teacher and a father figure.

BAD NEWS from the world of hotels and restaurants that the icon that was Victor Ceserani has passed away at the very wonderful age of 97. He was taken into  hospital two weeks prior to his death suffering from cancer. Born of Italian-Belgian parents on October 23, 1919 in Knightsbridge, London, Ceserani spent the first 20 years of his life living in Chelsea.

Shortly after his 15th birthday, keen to get away from academic subjects that he said were “beyond my comprehension,” he joined London’s Ritz hotel as an apprentice, on a salary of seven shillings and six pence (37 new pence) for a six-day week. It was while working at the Ritz that that he met his future wife, Letti, at the Pheasantry Club in the Kings Road. The couple remained devoted to one another throughout what Cesarani described as “an exceptionally happy marriage.”

Ceserani was one of those rare birds that combined academia with practical and creative culinary skills.

As Ceserani was technically Italian, he received his National Service papers for the Italian Army, but promptly tore them up as his father had just taken out UK nationality, and he didn’t regard himself as an Italian.

When war was declared in 1939, Ceserani joined the Royal Fusiliers, initially training as a motor mechanic. He was then promoted to lance corporal and moved to the officers’ mess as cook for the 19th Battalion of Fusiliers in Cheshire.

Throughout the war, he worked as an officers’ mess cook in many units until he was posted to France just after VE day and finally demobbed in June 1946.

On returning to London, Ceserani took on the position of second chef at Boodles. In 1948, he was promoted to head chef and one of his famous recipes during that time was roast beaver, which he had acquired from the local butcher as it was not on ration.

He has written countless books on the subject of food, food preparation, culinary skills et al. He was much-respected both as a teacher and a father figure to many well- known chefs. I was fortunate to meet him with Brian Turner many, many years ago in London and my old colleague Gary Rhodes was one of his most enthusiastic students. Brian says he remembers all the wonderful, fun times, spent together.

During his career Ceserani was awarded an MBE for services to catering education in 1974. He finally retired in 1980 and was announced as an honorary fellow of Ealing College of Higher Education in 1982.

He was presented with the Catey Special Award, then called Personality of the Year, in 1984, and received the Catey Lifetime Achievement Award in 1992. In 1999, Ceserani was granted honorary life membership of the HCIMA, which later became the Institute of Hospitality. He was also an honorary member of the Royal Academy of Culinary Arts.

He will be sadly missed but warmly remembered by those that benefited from his skills and compassion and his love of our industry.

A CATEY is the hotel industry’s equivalent of theatrical awards.

CHEF AND TV PERSONALITY James Martin resigned last year from his highly popular Saturday Morning Kitchen on the BBC. This light hearted look at food and the personality chefs that were guests on the programme regularly attracted viewers in excess of 3,000,000. He explained how he had been banned from making an omelette in public.

The Omelette Challenge was a regular fixture on the BBC One Saturday morning show, where he invited the programme’s two guest chefs to make an omelette as quickly as possible using three eggs.

Martin’s job was to time the omelette-making and judge whether the often-uncooked dishes qualified for the leader board. He himself never made an omelette on screen.

Chef Paul Rankin had previously held the record for the fastest omelette, but that accolade now goes to chef Theo Randall, chef at his eponymous site at the InterContinental London Park Lane hotel, whose 14.76 second effort from May 2015 has now been officially listed in the Guinness Book of World Records.

James is travelling around France at the moment making a food programme, James Martin’s French Adventure. He’s driving my old friend Keith Floyd’s iconic CV2. Martin is an avid driver and collector of classic and performance cars. Knowing James’ passion for cars, Keith’s daughter Poppy called him and asked him if he would like to buy Keith’s old Citroen which was languishing away in a garage in France.

James immediately flew to France to collect it and drive it back to the UK. She had intimated that it was in excellent condition, but when it came back it had to undergo a fair amount of work to make it British MOT worthy. But body wise it is just about original.

HAS THE WORLD GONE MAD or is it just commerce and industry keeping up with an ever changing one. I was intrigued to find the following jobs being recently created.

Kodak hired Beth LaPierre as the first ever Chief Listening Officer in 2010. During her tenure, LaPierre engrossed herself on monitoring when and where Kodak was mentioned on social media channels, blogs, and anywhere else on the World Wide Web.

From her extensive data gathering, LaPierre would relay her insight to department heads and managers. Given ‘engagement’ is a focal point in the company-customer exchange, the first step remains to listen. Hiring a person to only listen is essential in beginning a meaningful conversation and relationship.

With the rise of social media, so came the meteoric rise of ordinary individuals who became well-known through a social media channels, known as ‘Influencers.’ One of the new jobs that has derived from the new business is Influencer agencies. These agencies have a network of ‘YouTubers,’ ‘Insta-famous,’ or other social media stars signed to work with them. For brands, agencies are responsible for finding the most suited Influencer. For an Influencer, it’s vital that the brand aligns with their public image and, together, create a successful campaign.

Global translation firm, Today Translations, put out the world’s first job advertisement for an Emoji Translator in November 2016. With emojis becoming a part of communication, it’s important to know exactly how different emojis are meant in varying cultures and contexts. For example, the emoji entitled ‘face with tears of joy’ is used by Westerners to convey laughter; in the Middle East, the symbol is used to express grief!

“A good chef needs no recipe but a glass of good wine.

OVER THE YEARS I have attended many interviews and of course interviewed hundreds of young (and old) applicants, but I have never known any interviewer ask the type of questions that a manager at TGI Fridays apparently asked an eager young recruit.

The interviewer reportedly asked if the applicant, who would like to remain anonymous, would ‘rather watch his parents have sex for a year or join in just for the start.’

Other questions included ‘would you rather s*** a brick or cry glass?’ during the interview for a part-time position at TGI Fridays in Derby’s intu centre.

Speaking to the Derby Telegraph, the interviewee said: “I’d already had a successful phone interview and I was really looking forward to this. It was a company I had heard good things about and I thought this job would suit me. The first question I was asked was whether I would rather watch my parents have sex for a year or join in just for the start. I was absolutely gobsmacked.

“Before I’d had chance to respond I was asked whether I would rather eat chocolate flavoured s*** or s*** flavoured chocolate. He seemed to think I would find it funny and join in. I thought it was disgusting, sick and pathetic.”

The interviewer has been suspended following the incident.

A spokesperson at TGI Fridays Derby said “As someone who loves being part of the Fridays’ family we are all really disappointed here with what’s happened and in no way does it reflect our Fridays’ values.”

In a statement, TGI Fridays said: “Fridays offers an industry-leading recruitment process, and this incident fell severely below our high standards.

“The questions posed during the interview with the candidate are absolutely not part of TGI Fridays’ interview process and we were very disappointed to learn of this incident. Immediate action was taken, with the person involved suspended.

“We have apologised to the candidate for the experience and offered them the opportunity to re-interview with us, which we hope they will take up.”

OUR RESTAURANT project has come to fruition with the final touches being completed on Tuesday of this week. Even though I say so myself the place looks great and thankfully the client is very pleased. The chef is happy and is indeed producing some good food. The total cost of the project was just under €12,000 including my fees. Not bad for a cosmetic reform! We now wait for approval from the customers.

ON THAT NOTE I will bid you farewell until next week and should aspiring restaurateurs need some help or advice, please do not hesitate to contact me. A toast to Good Food, Good Wine and Good Friends.