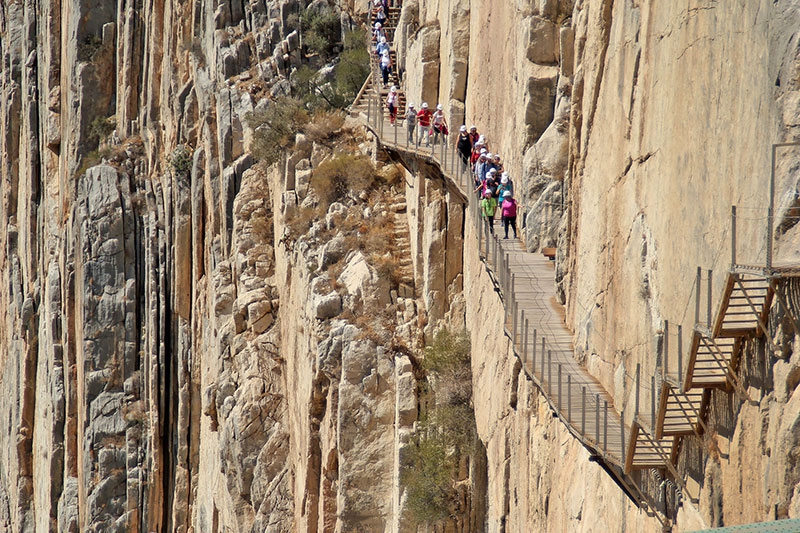 SUMMER tickets for Malaga’s stunning  Caminito del Rey walkway, suspended precariously 100 metres high along the steep walls of a narrow gorge in El Chorro, near Ardales and once described as the most dangerous footpath in the world, will go on sale on Tuesday, 28 March 2017.

Speaking at a press conference the President of the Diputación de Málaga,  Elías Bendodo, also announced that the Caminito del Rey has received 600,000 visitors during the first two years of its operation.

The recovery of this unique attraction has been a huge boost for the surrounding municipalities. Bendodo emphasised that the success of the Caminito has been due, to a large extent, to the co-operation between the Diputación, the town councils of Álora, Ardales and Antequera and the Junta de Andalucía.

“Two years after its opening,” he added, “we can say that the Caminito del Rey is a well-established brand and one of the major tourist attractions and hallmarks of the province.”

The walkway was built to provide workers at the hydroelectric power plants at Chorro Falls and Gaitanejo Falls with a means to cross between them, to provide for transport of materials, and to help facilitate inspection and maintenance of the channel. The construction began in 1901 and was finished in 1905.

King Alfonso XIII crossed the walkway in 1921 for the inauguration of the dam Conde del Guadalhorce and it became known by its present name. The walkway is one metre (3 feet) wide, and rises over 100 metres (330 feet) above the river below.

The walkway had fallen into disrepair and was partially closed for over a decade. After four years of extensive repairs and renovations, the walkway re-opened in 2015.

31% of visitors are Spanish, mainly coming from Madrid, Cordoba, Sevilla, Almeria and Malaga.

The  Caminito is now managed by Hermanos Campano on behalf of the  Diputación who have introduced innovations and improvements that enrich the experience such as guided tours, which have already taken by more than 22,000 people.

And, furthermore, it continues to facilitate accessibility, with initiatives such as making it possible for people with visual disabilities to enjoy the environment as well.

The  Diputación invested €5.5 million on the new walkways  and works to  the main access roads. By 2019, another five million euros will be allocated to projects that are underway, such as the new visitor centre and parking, which will be operational by the end of the year.