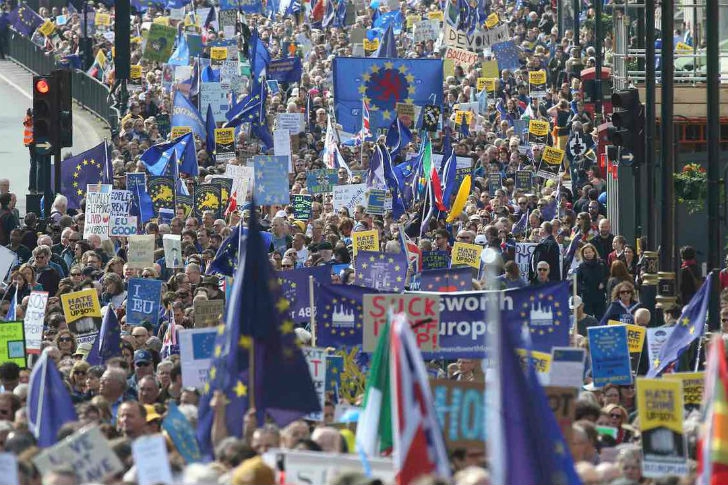 MARCH FOR EUROPE: Protesters make their way through central London.

DAYS before Theresa May is due to trigger the official Brexit process, tens of thousands of people descended on central London to protest against the UK’s impending departure from the European Union.

The Unite for Europe march was very peaceful, with many protesters bearing yellow flowers to lay at the memorial of Wednesday’s Westminster attack opposite parliament, before a minute’s silence was held.

Among the various speakers, Liberal Democrats leader Tim Farron was particularly well-received, as he told the gathered masses that he was present to speak not only for the 48 per cent who voted remain, but also many leavers.

“We are here to show solidarity and respect for those who voted leave. We do not believe they wanted this. [Theresa May] does not speak for 52%, she barely speaks for 5%,” he told the crowd.

“We are not giving up this week of all weeks. We here are as testament that we refuse to despair. Britain can be better than this.”

His predecessor Nick Clegg said that “sadness” over Brexit has now given way to “a perpetual sense of anger about the choices that Theresa May and her government have taken since.”

He also accused the prime minister of “threatening to turn our country into a bargain basement cowboy economy.”

Seb Dance, a Labour MEP, told the crowd that “we are not in denial and we shouldn’t get over it.

“They are working for the hardest Brexit imaginable which is something they have no mandate for. It’s not us who need to confront reality. It’s the Brexiteers.”

David Lammy, Labour MP for Tottenham, added that people have been changing their minds in the wake of last June’s referendum.

He said: “We’re living in a dictatorship. In democracies people are always allowed to change their minds. Over the coming months and years we will fight. Labour needs to rediscover its mojo, and quickly.”

The march took place on the same day that leaders of the 27 other EU nations met in Rome to celebrate 60 years of the union, with the UK the only country absent.

Spanish-based campaign group Bremain in Spain was also present, and we intend to catch up with figurehead Sue Wilson for her views shortly.