Do not miss the Easter hat parade! 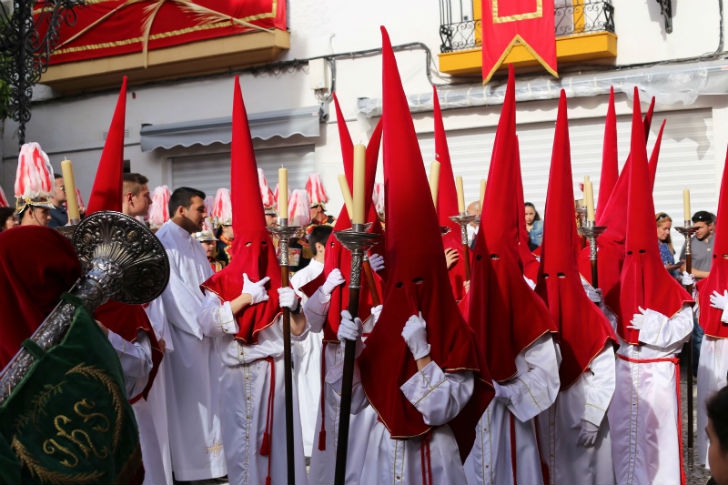 CHRISTIANITY commemorates Easter on the same dates worldwide, but in Spain it’s for a longer period of time than most and is more religious, particularly in Andalucia, renowned for its traditional Easter celebrations.

Here the Holy Week is just that, Holy and sacred.

The first processions start off with great solemnity that depict the period of mourning, finishing off with joyous festivities symbolised by flowers and cheerier garments to rejoice in the son of God’s triumph over death itself.

The clothing they wear is very symbolic and although there is not a bonnet in sight, hats certainly do play a big part, it’s just a very different type of hat!

According to a practice that seems to date back to the times of the Spanish inquisition, those punished on religious grounds were forced to wear a cloth garment that covered their chest and back and a long cardboard cone on top of their heads to hide their true height and help keep their anonymity.

They call this cone a ‘capirote.’ I on the other hand can only call it as I see it and when I first moved over from the UK in the 80’s I saw before me none other than the archetypal headdress of the Klu Klux Klan.

I was already in awe at the magnitude of the whole Spanish Easter movement. The entire town seemed to be taking part in the parades or lining the streets.

There was such an intense feeling of reverence on such a mass scale that when I suddenly saw the very epitome of the KKK coming towards us I nearly wet my knickers!

I’m not joking, when not expected, it’s scary!

I couldn’t even begin to understand why they were there or what this had to do with Easter. Where on earth had I come to live?

Obviously at some point someone did explain that they were not the KKK, just part of the religious reenactments, but 30 years on, although I do enjoy the locals’ enjoyment of this time of year, I still find it unsettling to see so many ‘klansmen’ taking to our streets.

You on the other hand are now forewarned. Just be prepared for sharply pointed-hats, full-faced cloth masks with sinister looking eyes, peering through peepholes in the dark of night when you least expect it and embrace a week that is truly a ‘hats off’ to Spanish tradition.