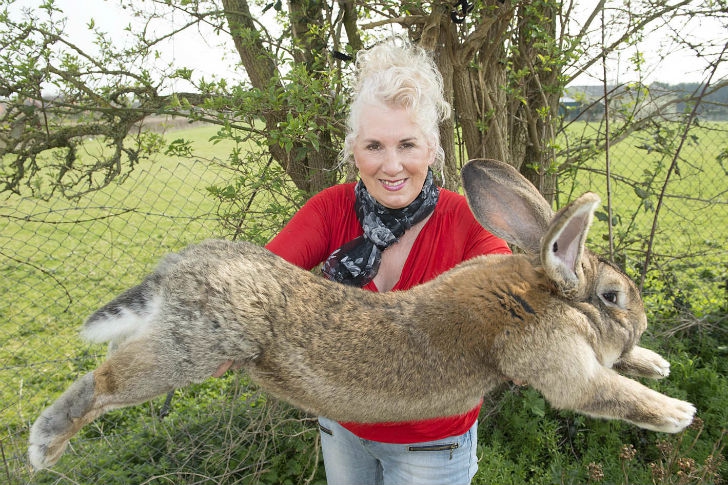 GIANT RABBIT: Was found dead on arrival in Chicago.

DO you possess exceptional interpersonal skills?

Are you equally skilled at customer care and PR? Yes?

Then, read on! (And no, I’m not offering you a job, but you might find that a certain airline may in the near future.)

United Airlines is facing another PR disaster after a potentially record-breaking giant rabbit perished en route to Chicago from London.

The 90cm-long bunny, called Simon – 10-month-old son of Darius, the current Guinness World Record holder for the world’s biggest rabbit (at 1.3m-long) and expected to have grown larger than his dad – was found dead on arrival.

United is still trying to tackle the public relations disaster after passenger, Dr David Dao, lost two front teeth and suffered a broken nose when forcibly removed from a flight at Chicago airport in order to make space for crew from a partner airline.

The incident caused outrage and widespread condemnation after footage was watched by millions online. And not helped by United’s CEO describing Dr Dao being dragged from the seat he had paid for as being ‘reaccommodated.’

All airlines overbook as the system is based on a presumption of a percentage of ‘no shows.’

In the USA it’s designed to cope with passengers on flexible tickets, but UK airlines do it even where passengers are on non-refundable tickets.

How are airlines allowed to sell the same seat twice and then eject one of their passengers?

Imagine the same happening at hotels or theatres; there’d be riots!

Airlines also put their own and partner airline staff on flights at the expense of paying customers.

Is this really an industry problem or one more characteristic of certain airlines – like, err, United? Now, I admit I’m a nervous flyer after experiencing, at the tender age of seven, a forced landing in Tunisia when the plane was aiming for Malta.

And all because of a storm over Malta, ending up in a different continent!

So, now there’s not just the worry of attacks on planes, strike action or weather delays, but of being ‘deplaned.’ Or ‘reaccommodated.’