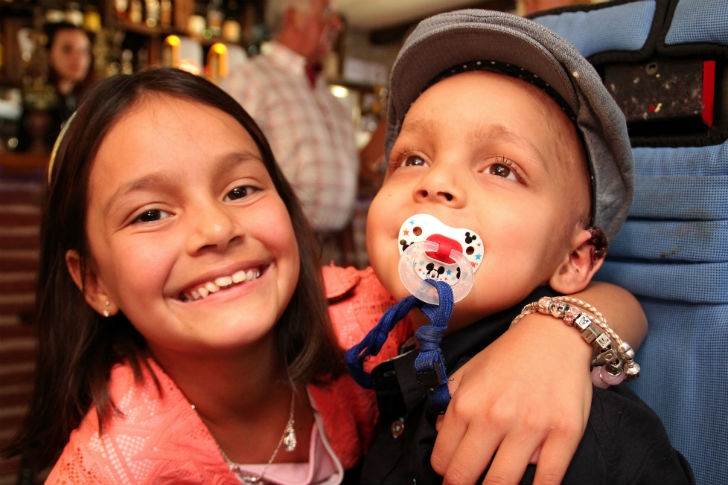 BRAVE cancer battler Leo Bermejo is back in Almeria after undergoing six weeks of ground-breaking proton beam therapy in the United States, and the Euro Weekly News was on hand to join the celebrations at his homecoming party.

A sizeable group of friends, family members and supporters gathered at the Laguna restaurant in Las Marinas, Vera, to welcome him back from his six weeks of treatment in Oklahoma and wish a belated happy birthday to big sister Sofia, who recently turned nine.

Among the many gifts on display was a framed copy of one of the first double-page spreads that we ran as part of our ongoing Leo the Lion campaign.

Leo, mum Karen and Sofia were all in high spirits despite suffering from jetlag, having only travelled to Spain from Canada three days beforehand and losing some luggage along the way.

Karen kindly agreed to an exclusive chat with us, during which she explained what will happen next as 4-year-old Leo’s fight against a rare form of brain cancer continues.

“We’re still catching up to be honest,” she laughed. “Over the next two weeks I’m planning to let Leo chill a bit and get over the jetlag.

“After that we’ll see how he is about starting at the special needs school in Vera again, then once we’ve get the clear scan over with we’re thinking about hyperbaric oxygen therapy, which they have in Malaga.”

She went on to explain how this type of treatment exposes the patient to high oxygen concentrations, which can help stimulate the growth of new brain cells before the delayed effect of the proton therapy kicks in.

Due to a lack of knowledge about the type of cancer he has, Leo must also undergo a brain scan every six weeks for the next two years before any definitive evaluation can be made, and he also needs an intensive rehab programme.

“The fundraising doesn’t stop since we don’t know the cost,” says Karen. “They’ve recommended he needs a walker which costs about €4,000, for example, and he hasn’t had any benefits from the Spanish government yet, which won’t be backdated when they finally come through.”

Overall though, Karen remains incredibly upbeat despite the family’s ordeal, and she was keen to express her gratitude to EWN readers and others who have helped Leo’s cause.

“Thank you to everyone who has supported us from day one, there are no words to describe it and it is overwhelming how Leo has touched so many people’s hearts.

“It is crazy how people who don’t know him feel like they love him and relate to him.

To give your support to the ongoing Leo the Lion fundraising campaign you can donate in the following ways: