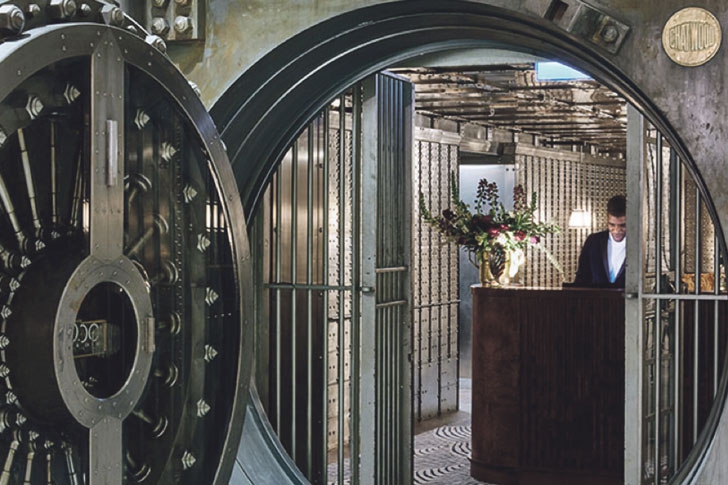 Original in Design and in Fact - Entrance to the Vault bar at the Ned.

THERE ARE NOW MORE BILLIONAIRES living in the UK than ever before despite fears over Brexit, the Sunday Times Rich List has revealed this year’s list found the richest 1,000 people and families have a record total wealth of £658 billion, a rise of 14 per cent on last year’s £575 billion figure.

The wealthiest people in the UK are elderly brothers Sri and Gopi Hinduja, whose latest project is to convert the Old War Office in London into a luxury five-star hotel and 88 luxury apartments for the super-rich.

The pair first topped the list in 2014 and now have a fortune of £16.2 billion, made through investments spanning the oil and gas, automotive, IT, energy, media, banking, property and healthcare sectors.

They are now among 134 billionaires on the list – a record number in the UK and 14 more than last year’s.

In today’s world, being simply a millionaire no longer secures you a place on the Rich List, with a fund of £110 million now needed to get you a place in the top 1,000.

Two decades ago people needed a fortune of only (sic) £15 million to make the cut.

Robert Watts, compiler of the rankings, said: “While many of us worried about the outcome of the EU referendum, many of the richest people just kept calm and carried on making billions.”

AND SPEAKING OF MILLIONS, regular readers may recall me mentioning about how in the 80’s cities were closing banks down and entrepreneurs were converting them into restaurants and fashionable wine bars and brasseries.

I commented that the practice had seemed to have faded.

So it was with some interest that I read from London that the former Sir Edwin Lutyens-designed Midland Bank building on Poultry, just a minute’s walk from the Bank of England, has been turned into a luxury hotel.

The Ned – the largest and most ambitious hotel to launch in London this year – is set to welcome its first guests.

A former Caterer named Hotelier of the Year 2015, Nick Jones is the man behind the enormous project.

He never intended to open a hotel in the City of London. The capital’s financial centre is not a typical location for an outpost of Soho House & Co, the company founded by Jones 22 years ago and renowned for attracting guests and members from the media and entertainment industries.

He was told about the availability of the building by the landlord of Little House, one of 18 members’ clubs owned and operated by Soho House & Co worldwide.

“I wasn’t particularly keen to go along, but I didn’t want to appear rude,” he recalls.

“The banking floor was jaw-droppingly beautiful,” he said. “I clambered up on the roof, with its views over St Paul’s, and immediately saw the huge potential the property offered as a hotel and collection of restaurants.”

The hotel features 252 bedrooms, nine restaurants, two swimming pools – one on the rooftop and one in the basement – a spa, members’ club and much more.

The Ned is a beautiful, multifaceted beast, which required the help of a partner to create.

After speaking to Ron Burkle, the American investor who acquired a 60 per cent stake in Soho House & Co in 2012, Jones met with Andrew Zobler, the founder and chief executive of Sydell Group.

Burkle is also the main financial backer of Sydell Group, a company that has experience of grand renovation projects through the opening of six hotels in the US during the past five years.

“That was the start of our collaboration and it’s been fantastic,” enthuses Jones.

“We love each other more than we did at the beginning, which is unusual when you’re involved in a project of this scale.”

While Soho House & Co has extensive experience of developing a variety of hospitality businesses – as well as the members’ clubs (12 of which feature bedrooms and welcome non-members), it has also created 16 restaurant brands – nothing comes close to the scale of the Ned, which covers nearly 30,000 square metres.

Jones and his team made the most of the building, encouraging him to look to its banking heritage for design cues. Hence, much use has been made of the banking hall’s original walnut-panelled counters, used by tellers, repurposed as bar counters and dividers between the different restaurants.

Once bustling with bank customers, the space will now buzz with some 850 restaurant customers at any one time.

Meanwhile, in the basement, the bank vaults feature a lounge bar, containing more than 3,000 original stainless steel, engraved safety deposit boxes that once stored gold bullion deposits of £335m (£15b in today’s money) and the two metre-wide doors have been retained.

The £220 million investment is now in the hands of Gareth Banner, the managing director of the Ned, who was appointed from his former general manager role at the Renaissance St Pancras hotel, London, and is the person responsible for the hotel on a day-to-day basis, who explained the logistics.

“We have a central production kitchen, which feeds into all the restaurants, and a specific kitchen for each restaurant,” he says.

“The restaurants will all be run independently with their own head chef, restaurant manager and team, while behind the scenes there will be a lot of shared services – such as purchasing.”

Staffing the Ned with a team of 800 is what has kept Banner awake at night. The process, however, has been on track, with many individuals being recruited directly from Europe, despite the uncertainty of what Brexit will mean in the long-term with regard to employing staff from within the EU.

Teams of recruiters have appointed in Rome and Barcelona through the offer of attractive packages, rather than wait for individuals to come to the UK and for the Ned to then compete with another 10 businesses for their services.

“It is a worry and a concern for everyone in our industry how the government is going to deal with the immigration situation,” says Jones.

“Over 75 per cent of the people who work for Soho House in the UK weren’t born in this country. I’m sure the government will consider a way around it – they are going to have to.”

Once again, the Hospitality Industry in the UK shows its concern for the future of employment of foreigners after Brexit. But for the time being the Ned will no doubt thrive in the competitive world of London hotels.

It is still one of Europe’s top destinations. The City has never been considered a leisure area especially in the evenings, up until about 10 years ago bars closed at 8.00pm. But with the dining experiences and entertainment on offer at this luxury hotel, it will surely be at the hub of the financial district.

The old bank may well welcome more bankers as customers, than used to work there! (some content courtesy of the Caterer. www.thened.com)