Have you, or anyone you know, got what it takes to be a ‘Master Chef’ 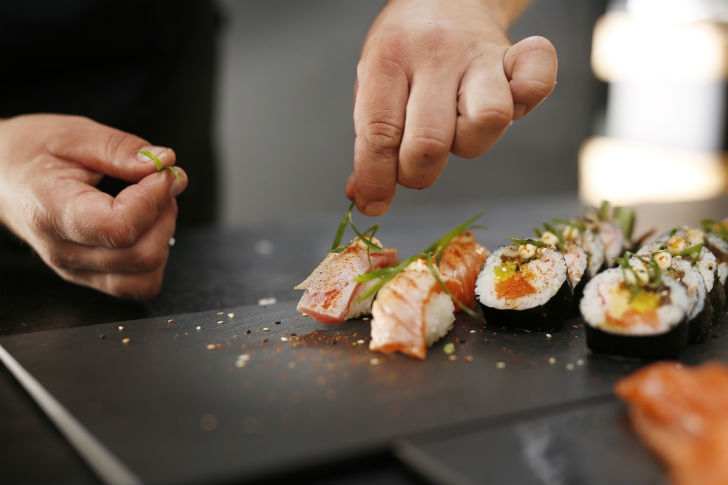 REGULAR READERS WILL KNOW that I and many other foodies around the world are occasionally captivated by ‘cooking programmes,’ not least the franchise that is Master Chef.

This ever popular TV show was originally fronted by the most annoying Lloyd Grossman, whose voice always sounded like a mix of Canadian and a Norfolkian (Norfolker?)

But today and for the last 13 years, it’s a full on cooking and entertainment show hosted by Aussie Chef John Torode and probably the best known ‘Grocer’ in the UK, Gregg Wallace.

This year’s final was last week and the winner came as a surprise.

The last four, consisting of London muso/DJ Steve Kielty, Giovanna Ryan from an Italian family background, Alison Reilly, the attractive Irish girl with a passion for those things different and Saliha Mahmood-Ahmed the shy junior doctor from Watford with Pakistani parents.

Saliha, who sincerely described herself as the most boring person you could meet, (if you can call pretty, doctor, wife, mother and brilliant cook ‘boring’ – bring it on!) impressed judges Torode and Wallace as well as invited food critics and guest Michelin starred chefs with her take on traditional Indian dishes and flavours and turning them into extraordinarily modern dishes.

Up until Alison lost out to the other three, I thought she would be in the final and with Steve would be the favourites.

But it was not to be and having watched the final I could feel Saliha coming to the final hurdle and jumping over it with some ease and I could see the anticipated crowning changing places.

‘Hats off’ (or Chapeau to use a ‘cheffie’ word!) to all contestants, particularly, the last four. All showed great skill and knowledge and more importantly, passion, for food.

I have seen highly paid ‘professional’ chefs who would have found it difficult to produce some of the dishes that they all produced.

Time for a culinary break until the next moreish programme, will it be Celebrity Master Chef, Professional Master Chef or Junior Master Chef. America, Australia, Spain???

The franchise keeps going and goes to prove ‘there’s money in them there sauce pans’ – be it in restaurants or on TV. Bon appetite!

MY WINE CORNER THIS WEEK has to relate to the wine mentioned in my ‘client’ below.

The wonderfully named ‘Nice to Meet You’ is not just a gimic.

The wine from the Rias Baixas domaine is not 100 per cent Albariño as one would hope and probably expect, but with 40 per cent of that grape and a blend of 30 per cent Godello and 30 per cent Treixadura this crisp, somewhat dryer than normal, wine from Adegas Castrobrey has intensity on the nose and a racy acidity which couple to bring forward stone fruit and fennel aromas on the palate.

Represents good value at €15, is quaffable, but at that price perhaps better with dinner. Shellfish, oysters and subtle fish should go well.

I’M HELPING A CLIENT in their restaurant at the moment.

On the first evening I was in watching how the operation went, I was surprised that the very charming and good looking Argentinian waiter, Juan, seemed to be receiving lots of kisses from the female clientele.

Knowing that he had only started a couple of days previously I was intrigued that he seemed to be on such affectionate terms with so many female guests.

That was until I found out the password for the WiFi connection was ‘give me a kiss and I will tell you.’

With a wine on the list from the Rias Baixas called ‘Nice to Meet You’ there are plenty of quirky things about this place!

ANYONE WHO TELLS YOU that living on a golf course is quiet obviously doesn’t live on one!!

I have lived in Guadalmina, near Marbella, on front line golf for 15 years. Don’t get me wrong during the day it is extremely tranquil if, with any noise at all, only the very distant sound of the traffic.

But, and I can set my watch by it, in the morning at 7.00am all the machinery start their day’s toll. And they all seem to drive past my windows.

This cacophony continues in varying degrees, according to which part of the course they are on, for about an hour.

The other noise is of course the watering of the course. Giant irrigation sprays whizz around beating drums on the leaf filled trees.

My apartment is on two floors, both with ample terraces, but being a duplex it means that there is an apartment below me, so you can imagine how high the top terrace is from the ground.

But over the years I have collected more than 60 balls from said terraces and have also had two cracked windows caused obviously by the erratic ‘driving’ of the fanatical golfers as they compete.

What, for the life of me, I cannot work out is how anyone can hit a ball up to 15 metres high but manages to get a bend on it that has to be as much as 90 degrees to the left!!

THE REASON FOR THIS STORY is that I read with interest and amusement that the five-red-AA-star Old Course Hotel, Golf Resort & Spa in St Andrews, Fife, has just completed a £10m, three-month refurbishment which includes a rubber roof to prevent ongoing damage from golf balls!!

As the hotel sits alongside the 17th road hole of the renowned Old Course, the roof is frequently damaged by dents and cracks from flying golf balls.

As well as the new roof from Euroshield, work has also been completed on the decoration of 103 of the 144 bedrooms and the replacement of the hotel’s windows.

I wonder how many of them were damaged by wayward balls!?

Obviously if golfers on this prestigious course can hit the roof of a six-storey building they will have to have even greater abandonment than those who play Royal Guadalmina.