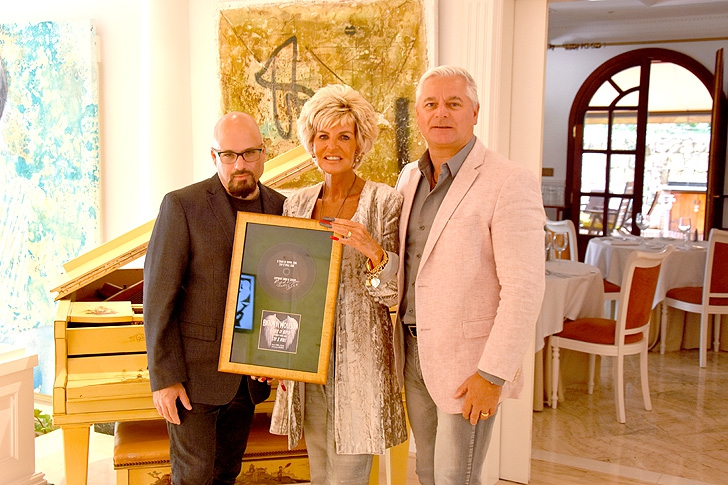 Antony (left) presents the framed discs to the Euesdens

MUCH respected singer Antony Wolfson met with Michel and Steven Euesden, owners of the EWN Media Group to present them with a framed CD and single.

His latest recording, A Touch of Heaven was originally written by the highly successful duo of Lieber and Stoller for Elvis Presley but as Elvis never had time to record it Mike Stoller invited Antony to record the song, commenting after hearing it “Antony’s relaxed performance suits the style of my song perfectly.”

Now, Antony has two exciting new projects as he has now been offered four more new songs from the writers and plans to record an LP called Antony Wolfson sings Lieber and Stoller which will consist of the six songs now made uniquely available to him, together with six Elvis inspired songs.

The album will be recorded in Marbella using the best local musicians and technicians and will be followed by a tour.

This brings him to the next exciting stage in his career, as he is currently in discussion with the C.E.O. of the Heartbreak Hotel situated opposite Graceland in Memphis to perform a range of Elvis songs there when next touring the USA.

Antony has been interviewed by a number of BBC radio stations in the UK where his single is on the play list and the song is currently gaining 100,000 plays a month in the USA so with the buzz about his popularity and the  summer approaching he is now booked for seven performances a week around the Marbella area.

The EWN Media Group has been delighted to be a supporter and Media Partner of Antony Wolfson for some time now and the framed CD and Vinyl Record will take pride of place in the Group’s Head Office in Benalmadena.

To find out what is causing so much interest, visit www.facebook.com/antony.wolfson.