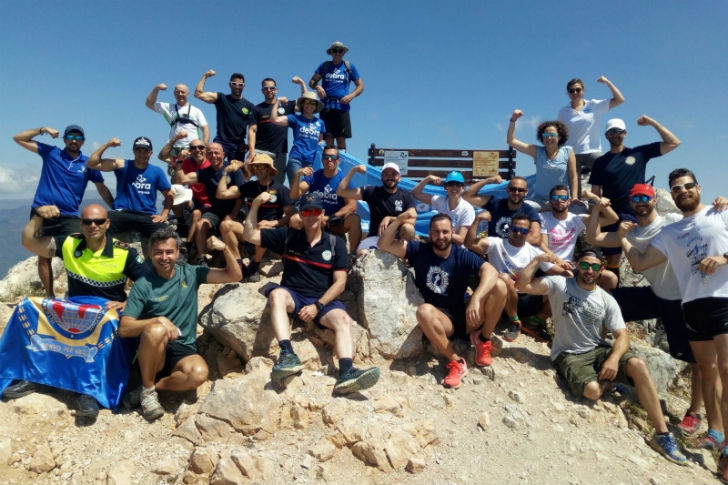 The Group at the top

THIS morning DEBRA-Butterfly Children Charity celebrated the first anniversary of its charity bench situated at the peak of La Concha at 1215 metres.

The bench was the brainchild of local Marbella fireman José Pérez Bellido. José wanted to give visibility to Butterfly Skin at the same time as offering a place for visitors of the mountain to rest and take in the views.

With the help of his fellow firemen, la Obra Social “la Caixa” and the Town Hall, in 2016, José saw his dream become a reality. Since then hundreds of visitors have made use of the bench and shared their selfies with the hashtags #BancSolidario and @pieldemariposa to create awareness of the cause.

To celebrate the anniversary of this unique initiative and to pay tribute to all the Butterfly Children families who, on a daily basis, face challenges much bigger than mountains, a group of special individuals set off this morning intent on reaching the peak.

The Mayor of Marbella, José Bernal, was present at the Fire Station for the departure of the expedition. He praised the firemen of Marbella for the work they do within the city and congratulated them for the solidarity they have shown to Butterfly Skin.

Nieves Montero, President of DEBRA-Butterfly Children Charity expressed her appreciation to everyone involved in the bench and for helping Butterfly Skin to become less unknown to society.

The pinnacle moment of the expedition was when a helicopter provided by World Aviation Helicopters circled the bench with Adrian Soto, a 12 year old boy with Butterfly Skin on board.

For Adrian and the many others suffering from the condition climbing a mountain is only a dream because the journey on foot or being carried would cause serious blisters and extreme pain.

Today, for Adrian the dream became true, he said he was very excited and nervous but not afraid. Ville Laaksonen of World Aviation Helicopters said he was delighted to help raise awareness of the condition and to support the work of the charity.

To conclude the celebration and reward the participants, they were treated to a huge paella at Marbella Fire Station afterwards.

Butterfly Skin is a rare, painful and incurable disease that causes extreme fragility of the skin. From the moment a baby is born with the condition they have blisters and wounds all over their body.

Normal routines such as feeding or changing a nappy are complicated tasks for the parents and very painful for babies. Even a simple hug can hurt them.

For more information about this incurable disease visit www.pieldemariposa.es.