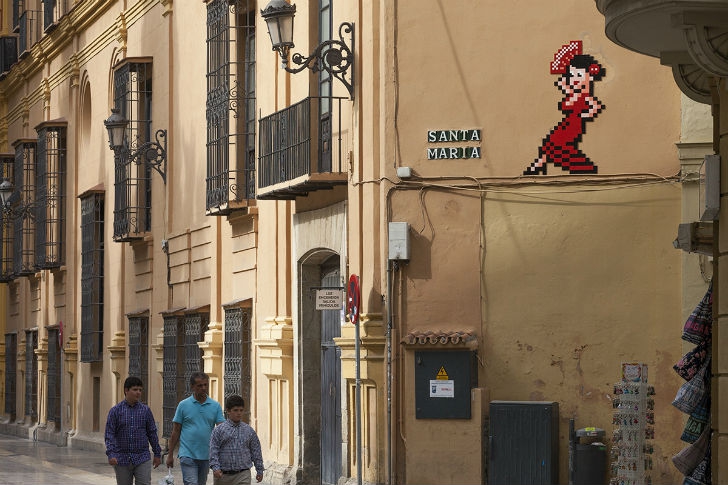 The gypsy girl who has caused the argument

CONTROVERSY is raging over the artwork produced by anonymous French graffiti artist Invader which has suddenly appeared in Malaga.

The 29 images nearly all based on scenes from the Space Invader game have been placed without permission on buildings throughout the city but one in particular, that of a gypsy girl has been placed on the wall of the Episcopal Palace.

The mayor of Malaga Francisco de la Torre has admitted that he likes the concept of the art, but has received complaints from the Malaga Bishopric saying that the Palace is classified as a Building of Good Cultural Interest (BIC) and should be removed.

As the Bishopric did not receive an immediate response to its complaint, it has reportedly made a separate complaint to the Department of Culture of the Junta de Andalucia and the mayor has indicated that he will wait for the ruling from the Junta.

He did however point out that as the majority of artwork appears on buildings which are not classed as BIC then it was up to the owners to decide whether they wished to keep or remove the designs which are affixed with industrial glues.

The opposition PSOE party also criticises the fact that the image has appeared on the Palace, but a local art expert has suggested that the artwork is more important than the building.

Invader has now placed 3,481 of these artworks in 71 cities in Europe and North Africa and is quoted as saying “I define myself as an UFA, an Unidentified Free Artist. I chose Invader as my pseudonym and I always appear behind a mask.

“As such, I can visit my own exhibitions without any visitors knowing who I really am even if I stand a few steps away from them. Since 1998, I have developed a large scale project, code name: Space Invaders.”

In the same way that British artist Banksy has gained a following in the art world, some of Invader’s pieces have been removed and sold to collectors.