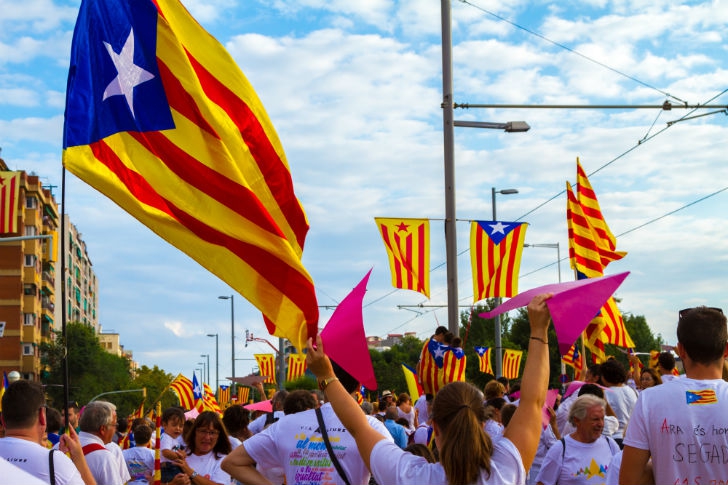 CATALUÑA: The only thing that can settle the issue once and for all is a referendum.

METROSCOPIA and CIS opinion polls found that support for independence inside Cataluña is at its lowest since rumblings were first heard years ago.

Both the national government and Cataluña are deadlocked because the only thing that can settle the issue once and for all is a referendum.

There is no provision for a unilateral referendum in Spain’s Constitution but even an illegal one would be better than Carles Puigdemont’s threatened unilateral declaration of independence.

It would put the 62 per cent of Catalans who don’t go along with his plans out of their misery and the rest of Spain too.

SPAIN’S president Mariano Rajoy vowed that the government will use everything within its power to prevent Cataluña’s referendum.

But what, apart from force, can it use?

On the other hand, if a referendum is unstoppable Rajoy can put the boot in gently but destructively by mentioning the little question of state pensions. Or the small matter of EU membership.

There’s more than one way of skinning a rabbit.

NAPOLEON the pig said in Animal Farm that all animals are equal but some are more equal than others.

By the same token probably all politicians are corruptible but some are more corrupt than others.

Political parties usually have their quota of rotten apples but in Spain the Partido Popular appears to have a monopoly and Mariano Rajoy’s spluttering promises of transparency have yet to bear fruit.

To top it all his Minister of Justice and Attorney General are allegedly close to principal players in the Lezo corruption case and the Public Prosecutor responsible for Anti-Corruption resigned after his offshore account in Panama came to light.

The aphorism about ‘Justice must be done and must also be seen to be done’ does not have a Spanish equivalent, more’s the pity.

BARÇA star Lionel Messi got 21 months for tax fraud although he won’t do time as his was a non-violent offence and he doesn’t have a criminal record.

Team-mate Neymar also has tax issues and it looks as though their arch-rival, Madrid player Cristiano Ronaldo could have problems too.

All are bad boys for not doing their fiscal duty and robbing Hacienda of its dues, but what about the corrupt politicos and ex-politicos who have done the same?

Obscenely overpaid players get rich through the sweat of their brows and by pushing a football around with their expensively sponsored twinkle-toes.

Shyster politicians past and present are infinitely worse because they got rich on public money. And they’re less entertaining to watch.