I’m up to here with all of it! 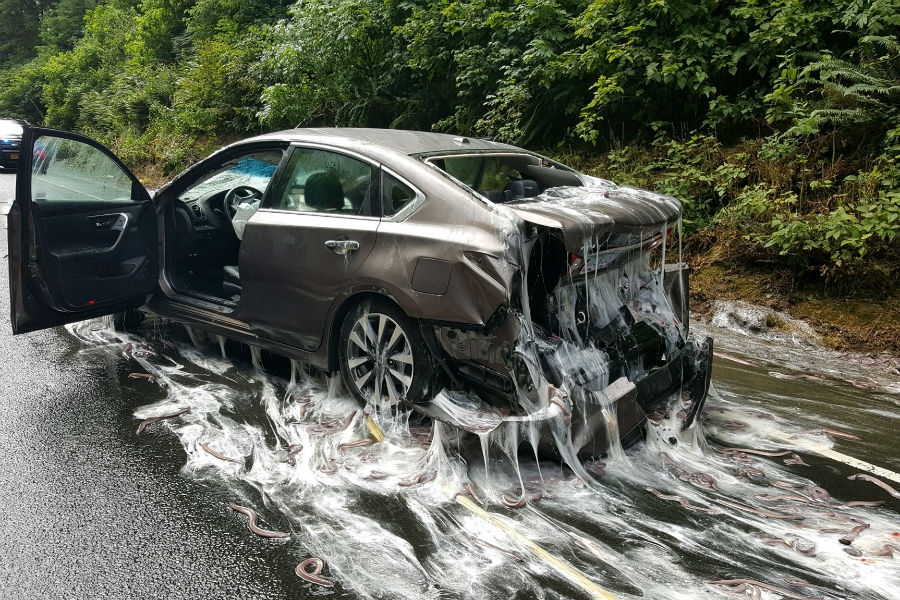 QUITE frankly, I’m just about ‘up to here’ with all of it.

I’m peed off, bored and utterly fed up with, Brexit, Islam, Blair, immigrants, political correctness, welfare whingers, gay rights, racism, all the politicians on the planet and Love Island!

In fact, I’m so sick of all the dissent and conflicting confusion engulfing the human race, that this week I’m not going to mention any of it. (Hurrah)

Instead we are going to talk about Snot eels! (Please don’t continue this piece if about to plunge your fork into…. well just about anything really!) It appears that this fish, properly known as hag fish, has been around for some three million years and has developed a defence mechanism which allows it to produce up to five galleons of mucus through the nostrils when distressed.

Also labelled the most disgusting fish in the ocean, it is never the less – surprise surprise, considered a delicacy in South Korea.

This week a lorry in Oregon, carrying almost three and a half tons of these creatures, overturned, creating a wave of sticky goop that spread across the road engulfing five cars, the occupants and ultimately rescuers in its slimy wake.

‘What to tell the dry cleaners?’ Oregon state police posted on Twitter, beneath a picture of one of their officers standing in a torrent of eel mucus. S’not our fault would be a start!

You really couldn’t make it up. Moving on to even more utterly irrelevant information; this week the Pope hit back at the constant flow of whinging callers by hanging a sign on his front door which read, ‘Complaining is Forbidden.’

‘To be at your best,’ it went on, ‘you need to focus on your potential and not your limits. So, stop complaining and set out to make yourself better.’

Al Fasano (who else!) a co-founder of ReLeaf, a dispensary in Las Vegas said. ‘We didn’t know the demand would be this intense. All of a sudden you have like a thousand people at your door.’

Tick Segerblom (Hi ya Tick) a senator who led the legislation lobby said: ‘On behalf of Nevada, I want to tell the world: Watch out. This is the New Amsterdam.’ Oh yeah? Bet you ain’t got no Tulips!

And as a final final, many congrats to Roger Federer winning this year’s Wimbledon.

A true gentleman and example to some of the rest of ‘em, who think that screaming obscenities across the court can actually help win matches. He did it all without a single grunt as well!

Try and make next year’s final between yourself and Nadal.

We’ll all be watching that one.