They only work once 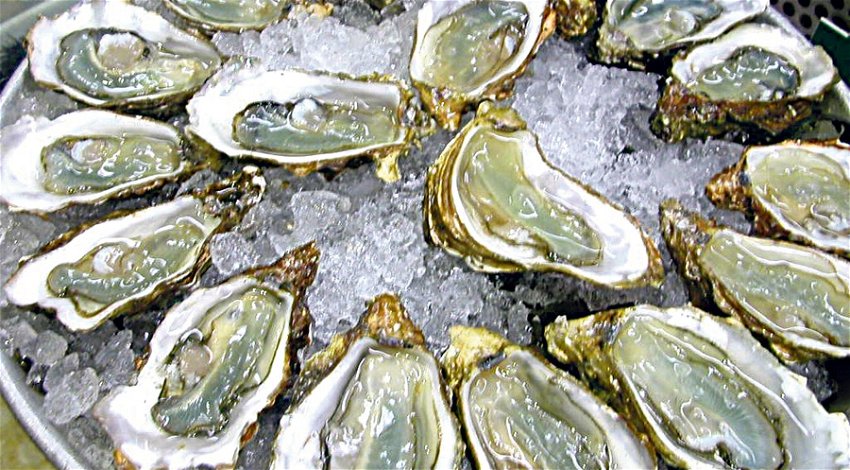 OYSTERS, those mythical oft maligned, love or hate, concha. With their reputation for food-poisoning outbreaks, sometimes fatal, and their promise of increasing sexual prowess –  do oysters really deserve their bad press?

I love oysters, technically you don’t chew them you break them on the back of your tongue and suck allowing the freshness of the sea to tickle your tonsils. Some lemon juice, a touch of Tobasco and a little black pepper with half-a-dozen oysters, and a glass of Champagne, is undoubtedly one of the best ways to start a leisurely lunch or an evening’s dining and entertainment.

As I reported in last week’s column on food poisoning, Oysters can be a cause – well the bug that can be found in shellfish can be, as Heston Blumenthal’s 500 customers found out to their dismay having eaten at his famous Fat Duck restaurant.

It’s worth bearing in mind says Tom Pickerell, director of the Shellfish Association, that last year, more people got ill from eating unpasteurised cheese than oysters. “It is just one of these things that the public have concerns about,” he says. “Our regulations are some of the strictest in the world.”

Britain produces almost 14,000 tonnes of oysters – Pacific and native o per year. In the past 12 months, there were only four incidents of food poisoning outbreaks related to shellfish, one of which was at the Fat Duck. A fraction of the illness caused by, say, barbecues.

Legislation insists that all oysters are screened for E coli and salmonella, and producers also regularly check for norovirus. Oysters are also then purified, where they are held in tanks of seawater that is continuously pumped through an ultraviolet chamber; a process that works very well at destroying bacteria, which are flushed from the mollusc’s gut into the chamber to be killed. The chances, after all of this, of the oyster harbouring noxious contaminants are, according to some experts, very slim indeed.

The NHS states on its website that, according to the Food Standards Agency (FSA), there are about 850,000 cases of food poisoning each year in the UK and about 500 deaths from it.

However, over the past 12 to 18 months, the only two single-case food poisoning deaths reported in the national press were the death of a forager last autumn from mushroom-poisoning and the alleged oyster incident in London’s Quaglino’s restaurant in May where a diner who passed away shortly after visiting the restaurant had eaten oysters for the first time there. As it happens, both Quaglino’s and its oysters were cleared of any involvement in the woman’s death, a fact not widely reported, which goes to strengthen the argument, that ‘people will always look to blame an oyster.’

I know a Chef, specialising in seafood and is a passionate consumer of oysters. After consuming his usual dozen, he felt very ill and went into anaphylactic shock. He was rushed to hospital where the specialist informed him he had developed an allergy to his favourite seafood and perhaps shellfish in general. This was akin to being told that a passion and desire he had nurtured for years was being taken away from him.

Keen to ensure this diagnosis was 100 per cent correct, a short time after, he picked up half a dozen and with his wife, drove to the local hospital where he sat in the car park and shot back all six. Banking on the theory that if he was going to go into shock again, he wouldn’t have far to go to get help. He sat and waited, but after an hour or so symptom-free, the couple drove home, and he has continued to enjoy oysters almost daily.

On a trip to Mont St Michel with a group of like minded foodies one of our crowd developed nausea as we got on the ferry. This turned into full blown food poisoning. Based on the fact that we had all consumed much the same thing, the blame had to fall on an oyster. We plied him with water for a while and after some time, just before reaching Blighty, he came out of it. He went back on the gin and by the time we got into port where a doctor was waiting, he was as right as rain. The doctor reckoned the amount of gin he drank could have helped him recover.

The Romans popularised oysters in Britain, with large numbers of shells having been found at Roman sites. Through to Victorian times, oysters occurred naturally in such large numbers that they were seen as a food for the poor. In Charles Dickens’s The Pickwick Papers, Sam Weller remarks: “Oysters and poverty always seem to go together.” How times have changed!

I like them andthink they are ‘seductive’ and am sure they can be an aphrodisiac. But in my experience if you eat a dozen oysters – only one of them works!

I make no excuse 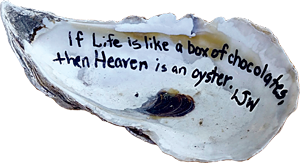 FOR  reprinting the following reply from a restaurateur in York who replied to a customer who complained about paying £2 for a hot water and lemon as a “rip off.”

I’m sorry that you feel you were “ripped off” and I will try and explain to you why you weren’t.

You entered the café and the waiter showed you to your seat and gave you a menu, waited for a time and then took your order. He entered it into the till, collected a cup, saucer and spoon and then took them into the kitchen. There he selected a knife, chopping board, got a lemon from the fridge, cut off a slice and put it in the cup. Then he returned to the dining room, drew off the necessary hot water and carried the cup to your table. When you were leaving, he printed off your bill, took it to you, processed your credit card payment and cashed off the till. After you left, he cleared away your cup, saucer and spoon, took them to the kitchen, washed and dried them, along with the chopping board and knife and put away the lemon. Then returning to the dining room, he restacked the cup, saucer and spoon, wiped down your table and replaced the menu awaiting the next customer.

That’s at least two to three minutes work for the waiter.

The costs of overheads for the business ie rent, business rates, electricity costs, bank charges etc works out at £27.50 per hour of trading. I pay my colleagues a decent living wage and after taking into account holiday pay, national insurance and non-productive time prior to opening and after closing the waiter who served you costs me £12.50 an hour.

Therefore together the cost is £40 per hour, or 67p per minute, meaning that the cost of providing you with two to three minutes of service was £1.34 – £2.00. Then the government add on VAT at 20 per cent which takes the cost of that cup of fruit infusion to between £1.60 and £2.40 irrespective of whether you had a tea bag costing one and a half pence or slice of lemon costing five pence.

I have to pay my suppliers otherwise the facilities won’t be available to other people who use them in the future. I accept that it makes the price of a cuppa in a city centre café look expensive compared to the one you make at home but unfortunately that’s the cruel reality of life. It’s actually the facilities that cost the money, far more so than the ingredients.

Perhaps the rudeness you perceived in me was triggered by the disrespect that I perceived in you by your presumption that you could use our facilites and be waited on for free.

I can hear Basil Fawlty saying this can’t you? It might be over the top, but he has a point. In fact go to his TripAdvisor site he has similar equally outrageous comments.

Electric Ray, the TV production company behind Class of ’92 and Carjackers, is looking for talented, would-be restaurateurs to pitch their ideas, meals and brands to some of the UK’s biggest food and beverage investors for a new business series for the BBC on the same lines as Dragon’s Den!

If successful, the restaurateurs would get the opportunity to trial-run their concept in a pop-up restaurant and have the chance to impress ‘some of the best names in the business.’ Applicants could receive ‘life-changing’ investment.

£30m a year. The UK’s oyster industry worth, an increase of £5m from two years ago.

50 oysters the amount per year eaten by the average Frenchman.

On that note! I will bid you farewell until next week and should aspiring restaurateurs need some help or advice, please do not hesitate to contact me. A toast to Good Food, Good Wine and Good Friends.

*Garry Waite is a foodie and restaurateur and Hospitality Management Consultant. If contemplating setting up an operation,  or having problems with an existing project contact him on [email protected]